'He is free at last.' Activists and politicians honor John Lewis 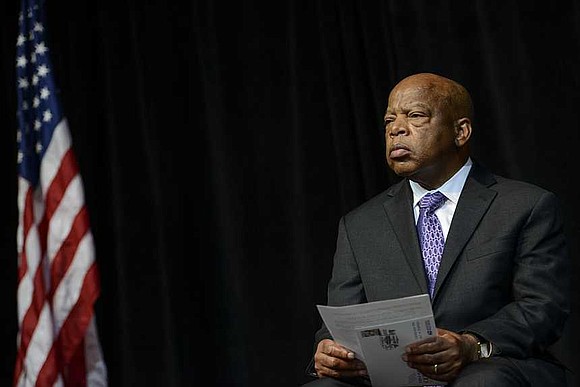 (CNN) -- As news of Rep. John Lewis' death rocked the nation, tributes to the civil rights leader and longtime Georgia politician poured in from activists and politicians alike.

Lewis was the son of sharecroppers who survived a brutal beating by police during a landmark 1965 march in Selma, Alabama. He ultimately became a towering figure of the civil rights movement and a longtime US congressman.

Here are some of the people who made statements honoring Lewis:

"Farewell, sir. You did, indeed, fight the good fight and get into a lot of good trouble. You served God and humanity well. Thank you. Take your rest, " King tweeted.

"John Lewis was an American treasure. He gave a voice to the voiceless, and he reminded each of us that the most powerful nonviolent tool is the vote. Our hearts feel empty without our friend, but we find comfort knowing that he is free at last," King tweeted.

In a tweet, Jackson recalled that he and Lewis met as fellow civil rights protesters in the 1960s -- and said Lewis "became the valedictorian of our class."

"John Lewis is what patriotism and courage look like. He sacrificed and personifies a New Testament prophet," Jackson wrote.

Jackson called this a "difficult season," noting the deaths of other civil rights titans this year.

"First Rev. Dr. Joseph Lowery, Dr. King's Chairman of SCLC's Board for 27 years. And now we have lost Rev. C.T. Vivian and John Lewis, on the same day.

"Andrew Young and I prayed for John Lewis & C.T. Vivian on Thursday as we convened those who I went to jail with in the 1960s," he wrote.

"Good Night, I will see you in the morning."

"Thank you for it all, Congressman John Lewis. You will be remembered beyond all of the tomorrows. Another one of our Great Men has left us. God's covering to you and your loved ones. #RestInPeaceJohnLewis," Reed tweeted.

"God has welcomed @repjohnlewis home. Defender of justice. Champion of right. Our conscience, he was a griot of this modern age, one who saw its hatred but fought ever towards the light. And never once did he begrudge sharing its beauty. I loved him & will miss him. #JohnLewis," Abrams tweeted.

"We are deeply saddened by the passing of John Lewis. His life-long mission for justice, equality and freedom left a permanent impression on our nation and world. The NAACP extends our sincerest condolences to his family, and we send prayers of comfort and strength to all."

"In this moment, it is difficult and heartbreaking to comprehend a world without John Lewis," Bowser said in a series of tweets.

"We knew John Lewis as the conscience of Congress, but often, he felt more like the conscience of our nation, the conscience of a generations-long movement to deliver on the promise of equal justice and equal opportunity. Now, our appreciation for his life will be demonstrated in the work we do to build on his legacy. So we remember what the Congressman taught us: that we have a moral obligation, a mission, and a mandate to do our part. For decades, the Congressman did his part and more."

"Rep. John Lewis was a titan of the civil rights movement whose goodness, faith and bravery transformed our nation. Every day of his life was dedicated to bringing freedom and justice to all," Pelosi tweeted. "John Lewis's memory moves us all to, in the face of injustice, make "good trouble, necessary trouble." May it be a comfort to his son John-Miles & his entire family that so many mourn their loss at this sad time."

"John Lewis was an icon who fought with every ounce of his being to advance the cause of civil rights for all Americans. I'm devastated for his family, friends, staff—and all those whose lives he touched. My friend, thank you for showing the world what #GoodTrouble looks like," Harris tweeted.

"John Lewis gave all he had to redeem America's unmet promise of equality and justice for all, and to create a place for us to build a more perfect union together. In so doing he became the conscience of the nation.

"Hillary and I were blessed by his friendship, support and wise counsel. We'll miss him so much, but we'll always be grateful that he lived to see a new generation of Americans take to the streets in search of his long sought 'beloved community,'" Clinton tweeted.

"John Lewis inspired us to bring about the change we dream of seeing in the world. He championed justice and opportunity for all — the lion of Civil Rights. His legacy is our pursuit of 'good trouble' that transforms America. Let us continue to honor and celebrate his life," Crump tweeted.