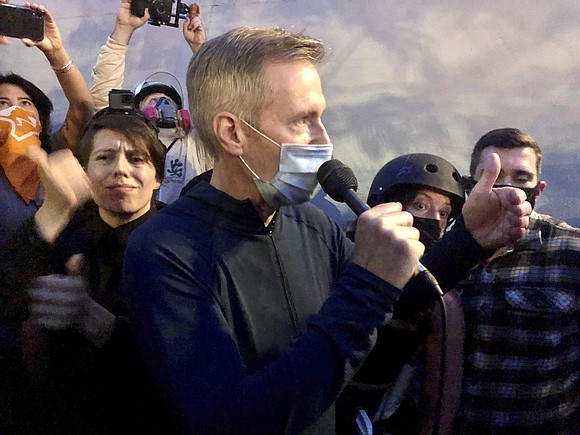 (CNN) -- Mayor Ted Wheeler was tear gassed in downtown Portland early Thursday morning, according to video and posts on Twitter from a New York Times journalist.

The video shows Wheeler, wearing goggles and a face mask amid a crowd of people, hold his nose and close his eyes in distress as a cloud of tear gas drifts by him.

"It stings. It's hard to breathe. I can tell you with 100% honesty I saw nothing that provoked this response," Wheeler said to the Times camera. "I'm not afraid but I am pissed off."

It's unknown at this time who is responsible for deploying the tear gas and there is nothing to indicate the mayor was targeted. Portland Police said they did not deploy any CS gas, a commonly used type of tear gas.

CNN has reached out to the mayor's office for additional comment.

The video appeared to come after Wheeler joined crowds to listen to protesters and answer their questions in response to violent clashes between demonstrators and federal forces, whose camouflage, troop-like uniforms and aggressive tactics have exacerbated the protests.

"It is an unconstitutional occupation," Wheeler told the crowd. "The tactics that have been used by our federal officers are abhorrent. They did not act with probable cause, people are not being told who they are being arrested by, and you're been denied basic constitutional rights."

President Donald Trump said federal officers were sent to the city to protect federal property, but protesters and local leaders have strongly opposed their presence. Demonstrations, many of which have been peaceful, have been ongoing for more than 50 days.

"This is clearly a waste of federal resources and it's getting increasingly dangerous," Wheeler told CNN. "We did not ask the feds to be here. We do not want them here. They're not helping the situation. They're not appropriately trained, and we're demanding that they leave."

Overnight into Thursday morning, CNN's team in Portland filmed a large gathering of protesters outside the federal courthouse. Among a mostly peaceful group, some protesters launched fireworks at the building and set several fires outside.

Each major provocation was met with a show of force by federal agents inside the building, who then launched tear gas into the crowd.

CNN witnessed a noticeably more measured response by federal agents compared to previous evenings. Rather than lining up in formation to march protesters back several blocks, federal agents used crowd dispersant projectiles and tear gas long enough to extinguish the flames that had been set, before retreating back into the federal building.

Portland Police said people threw flammable material and incendiary devices over a fence next to the courthouse, starting a large fire, while others breached the fence. Just after midnight, one person in the crowd threw a flaming item into the courthouse, police said.

At just after 12:30 a.m., Portland Police declared a riot due to the "violent conduct of the large group" and told the group to leave. Most refused, police said, and over the next several hours, Molotov cocktails were thrown at the federal building along with hundreds of projectiles. At least one assault was reported, police said.