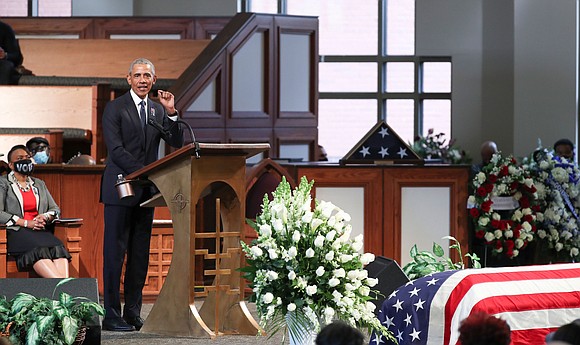 (CNN) -- Former President Barack Obama eulogized civil rights icon John Lewis on Thursday before the late congressman's body was laid to rest in Atlanta, drawing a comparison between the battles Lewis participated in during the civil rights movement and the current protests for racial justice happening across America.

Read his full remarks below.

James wrote to the believers, "Consider it pure joy, my brothers and sisters, whenever you face trials of many kinds, because you know that the testing of your faith produces perseverance. Let perseverance finish its work so that you may be mature and complete, lacking nothing."

It is a great honor to be back in Ebenezer Baptist Church, in the pulpit of its greatest pastor, Dr. Martin Luther King, Jr., to pay my respects to perhaps his finest disciple -- an American whose faith was tested again and again to produce a man of pure joy and unbreakable perseverance -- John Robert Lewis.

To those who have spoken to Presidents Bush and Clinton, Madam Speaker, Reverend Warnock, Reverend King, John's family, friends, his beloved staff, Mayor Bottoms -- I've come here today because I, like so many Americans, owe a great debt to John Lewis and his forceful vision of freedom.

Now, this country is a constant work in progress. We were born with instructions: to form a more perfect union. Explicit in those words is the idea that we are imperfect; that what gives each new generation purpose is to take up the unfinished work of the last and carry it further than anyone might have thought possible.

John Lewis -- the first of the Freedom Riders, head of the Student Nonviolent Coordinating Committee, youngest speaker at the March on Washington, leader of the march from Selma to Montgomery, Member of Congress representing the people of this state and this district for 33 years, mentor to young people, including me at the time, until his final day on this Earth -- he not only embraced that responsibility, but he made it his life's work.

Which isn't bad for a boy from Troy. John was born into modest means -- that means he was poor -- in the heart of the Jim Crow South to parents who picked somebody else's cotton. Apparently, he didn't take to farm work -- on days when he was supposed to help his brothers and sisters with their labor, he'd hide under the porch and make a break for the school bus when it showed up. His mother, Willie Mae Lewis, nurtured that curiosity in this shy, serious child. "Once you learn something," she told her son, "once you get something inside your head, no one can take it away from you."

As a boy, John listened through the door after bedtime as his father's friends complained about the Klan. One Sunday as a teenager, he heard Dr. King preach on the radio. As a college student in Tennessee, he signed up for Jim Lawson's workshops on the tactic of nonviolent civil disobedience. John Lewis was getting something inside his head, an idea he couldn't shake that took hold of him -- that nonviolent resistance and civil disobedience were the means to change laws, but also change hearts, and change minds, and change nations, and change the world.