Judges Join Discussion On Impact Of Black Women On The Bench 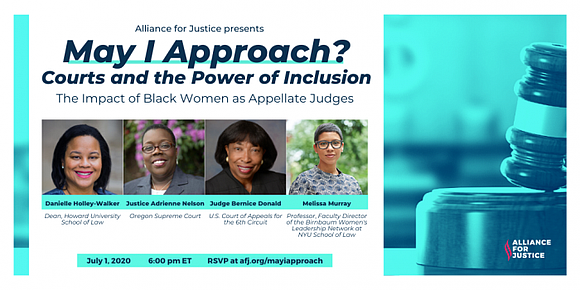 This week, Alliance for Justice’s Building the Bench Initiative is launching a new series called May I Approach? Courts and the Power of Inclusion that will feature conversations about the importance of experiential and demographic diversity in our federal courts. The first of these events will be Wednesday evening and focus specifically on the impact of Black women as appellate judges.

Currently, only eight Black women sit as justices on state supreme courts. In the entire 230-year history of Article III Courts, only eight of 794 federal appellate judges have been Black women. Five of those eight were nominated by Democratic presidents, and none of them by President Trump. Senate Republicans blocked two more of President Obama’s appointees, and President Trump instead filled those vacancies with white men. As Judge Anna Blackburne-Rigsby notes in her historical review of Black female judges, “Black women judges came to the ‘judicial’ table much later than Black men (by more than eighty years) and also much later than white women (by almost sixty years).”

Moreover, no Black woman has ever been nominated to serve on the United States Supreme Court. With Joe Biden having promised to appoint a Black female justice, the conversation will focus on the significance and impact of improving this kind of representation.

"The deliberative process unique to appellate court decision-making is richer and more thorough when the facts and law are analyzed through a range of professional and personal experiences,” said Building the Bench Director Myesha Braden. “We must recognize that the rule of law is undermined by a judiciary overwhelmingly comprised of people from a small corner of the legal profession, and who reflect a limited slice of American society."

The discussion will take place on Zoom and we encourage journalists to register and participate. Please do not hesitate to reach out if you’re interested in follow-up coverage of the Building the Bench initiative.

WHAT: May I Approach? Courts and the Power of Inclusion - The Impact of Black Women as Appellate Judges

The Honorable Justice Adrienne Nelson, the first African American to sit on the Oregon Supreme Court

Danielle Holley-Walker, Dean of the Howard University School of Law

The Honorable Bernice B. Donald, United States Circuit Judge of the U.S. Court of Appeals for the 6th Circuit, and the first Black woman elected judge in the state of Tennessee

Melissa Murray, Professor & Faculty Director of the Birnbaum Women's Leadership Network at NYU School of Law, and co-host of the Strict Scrutiny Podcast