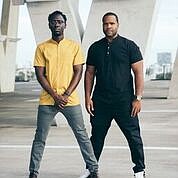 Society for the Performing Arts (SPA) presents classical hip-hop crossover duo Black Violin in the Impossible Tour on Tuesday April 7, 2020 at 8 pm in Jones Hall. With a list of collaborators including Kanye West, Lil Wayne, Alicia Keys, Wyclef Jean and Wu-Tang Clan, the group showcases their genre-bending “classical boom” sound. Fierce advocates for educational outreach, Black Violin will also host a workshop for orchestra students from Cesar E. Chavez High School in Jones Hall on April 7th, including a special collaboration with the students during the performance.

Black Violin’s record Stereotypes (2015) debuted at #1 on the Billboard Classical Crossover Chart and #4 on the Billboard R&B Chart. NPR praised the album and band, saying “their music will keep classical music alive for the next generation.” Their latest album Take the Stairs was released in October 2019.

Black Violin is composed of classically trained violist Wil Baptiste and violinist Kev Marcus. Originally from South Florida, they began playing together in their high school orchestra class. After attending separate colleges Kev and Wil reunited and decided to combine their classical training and love for hip-hop music; establishing a distinguished, genre-bending sound that has often been described as “classical boom”. 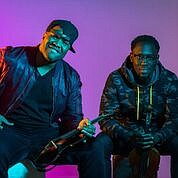 Black Violin’s Impossible Tour spreads the message that anything is possible— there are no limits to what one can achieve, regardless of circumstance. The focus is positivity and encouragement. As Wil Baptiste puts it, “When you come to a Black Violin concert, there are so many people in the audience experiencing something together. To me, that's what our show does, it brings people together. Not only that, you're being inspired, you're being uplifted, you're able to see something you probably have never seen before."

Tickets for Black Violin: Impossible Tour start at $39 and are on sale now. Tickets can be purchased online at www.spahouston.org, by calling 713-227-4772 or in person at the courtyard level ticket office at Jones Hall located at 615 Louisiana St. Hours of operation: 9 am – 5 pm Monday–Friday. Prices are subject to change.