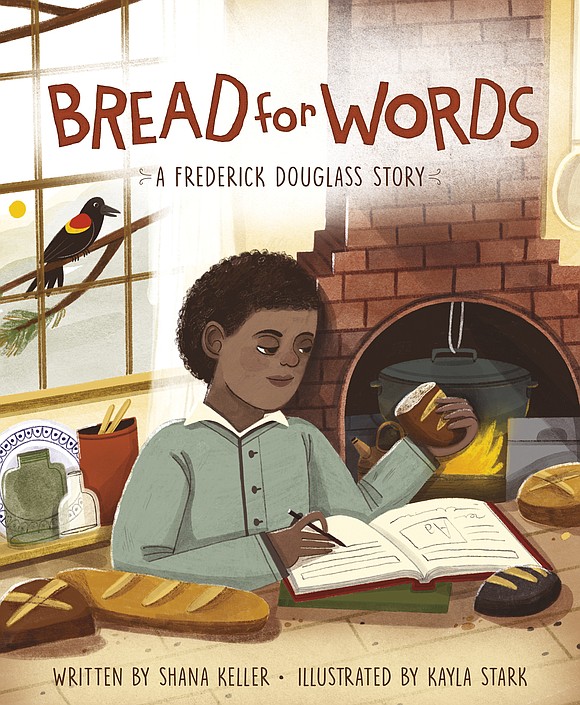 It's that time of day and your stomach's growling.

That's what happens when you're hungry and you need to eat: your body reminds you that a growing kid like you needs good food. Feeding your belly makes you stronger, and in the new book "Bread for Words: A Frederick Douglass Story" by Shana Keller, illustrated by Kayla Stark, a young boy finds something to feed his soul.

Little Freddy didn't know when he was born, but he knew where: he came into the world in a cabin in Tuckahoe, Maryland, and he lived there with his Grandma.

He did for awhile, anyhow, until the day Grandma sadly told Freddy that he had to leave the cabin because he was a slave and Old Master needed him at "the Great House Farm." Freddy didn't exactly know what a slave was, but he quickly learned that being one meant lots of work and he absolutely had no say-so about it.

The only reason for that, as far as he could tell, was that his skin was dark and Master's son, Daniel, was fair-skinned. This also meant that Daniel had a nice bed with blankets, while Freddy had nothing like that at all. Daniel also had schoolbooks, but when Freddy asked to learn to read and write, he was told that it was "Unlawful" and "Unsafe."

Maybe he shouldn't have asked: his questioning got him sent to Baltimore, where he was supposed to take care of a boy named Thomas. Once there, Freddy got a better bed and just a little education, thanks to Thomas's mother – but then Thomas's father became very angry when he learned that his wife taught Freddy some words! Thomas's father knew that if Freddy could read, he might try to reach for freedom.

It was right then that Freddy knew how reading "could loosen the chains of bondage." It was then that he knew he had to make a plan. "That moment" made him figure out a way...

No doubt about it: your child loves books. Most kids do; they love the pictures, the words, and the goodness of snuggling up with a new story. "Bread for Words" is one they'll love to share.

You'll have plenty to discuss with your little book-fan, too, once you've read this tale together. Author Shana Keller uses a small-but-momentous chain of events to introduce children to the life and work of Frederick Douglass, and it's all told quite minimally, staring with small slices of plantation life and ending with Douglass' search for learning. This brevity makes the story more powerful in its lack. Hint: don't bother with the afterword; it mostly just repeats the body of the book, but do read the author's notes. Properly introduced and explained in a kid-friendly way, they could send kids running for more information.

While illustrations by Kayla Stark could be fun for small children, this book is really more for early grade-schoolers who enjoy biographies and history. Introduce "Bread for Words"to your 6-to-10-year-old, and they'll be eager to bite into it.