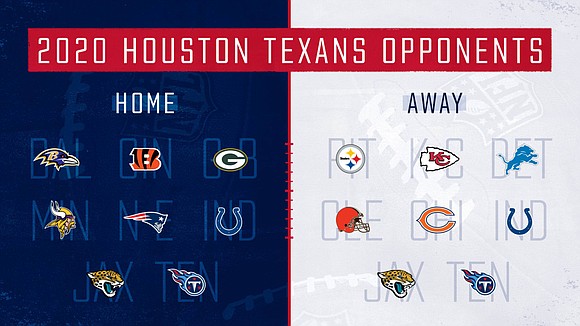 The Houston Texans 2020 regular season schedule kicks off with a primetime matchup at the defending Super Bowl Champion Kansas City Chiefs on Thursday Night Football. The Texans will also travel to Detroit for a Thanksgiving Day game against the Lions on national television in Week 12. Houston has won six of its last seven primetime matchups and its 18 primetime regular season games from 2016-20 are the most over a five-year span in team history.

The Texans start at Kansas City on September 10, which marks the first time in franchise history opening the season on Thursday Night Football and second-consecutive nationally televised season opener on the road. Houston will face the defending Super Bowl champions for the sixth-consecutive year after playing New England in 2015, Denver in 2016, New England in 2017, Philadelphia in 2018 and New England in 2019. The Texans open on the road for the seventh time in 19 years and in primetime for just the fourth time in franchise history (2002, 2013, 2019).

Houston’s home opener will be in Week 2 when it hosts the Baltimore Ravens before traveling to Pittsburgh for a matchup with the Steelers on September 27. The Texans are scheduled to play every AFC North team for the seventh time in team history and first since 2017. The trip to Pittsburgh is followed by back-to-back home games against the Minnesota Vikings on October 4 and Jacksonville Jaguars in Week 5, which will mark Houston’s first divisional game of the year.

In Week 6, Houston will travel to take on the division-rival Tennessee Titans for the first of two matchups on the year before returning to NRG Stadium to host the Green Bay Packers on October 25. This season marks the fifth time in franchise history and first time since 2016 that Houston will take on each member of the NFC North. Houston’s matchup against the Packers in Week 7 is immediately followed by a bye in Week 8, which marks the first Week 8 bye for Houston since 2013.

Houston will go on the road for two consecutive road games in Weeks 9-10 as it takes on Jacksonville before traveling to face the Cleveland Browns on November 15. Houston is on a five-game winning streak against Cleveland (2008-18), which marks its longest active winning streak against any opponent. The Texans return home in Week 11 to face the Patriots, which marks the sixth-consecutive season Houston has faced New England in the regular season, including a 28-22 victory in 2019.

The Texans play their second primetime game of the 2020 season against the Lions on Thanksgiving Day in Week 12. Houston defeated Detroit 34-31 in overtime in 2012 on their first Thanksgiving appearance and have won each of the last three meetings in the series. In Week 13, the Texans face the Indianapolis Colts at NRG Stadium for the first of two matchups in a three-week span. The Texans are looking to win three-consecutive AFC South division titles for the first time in franchise history and become the second team to accomplish the feat in the division’s history, joining the Colts in 2005-07. Houston’s final two road games of the season are in Weeks 14-15 and start with a matchup against the Chicago Bears, who are the only team in the NFL that Houston is undefeated against in franchise history (4-0).

The Texans will close out the regular season with consecutive home games for the fourth time in team history (2003, 2006, 2014). In Week 16, Houston will look for its ninth win in the last 10 matchups against the Cincinnati Bengals, dating back to 2008. The Texans will then close out the year with a home game against the Titans on January 3, which marks the 14th time in team history and the 11th year in a row that Houston will close the regular season against a divisional opponent.

What will happen if games are impacted or not played due to COVID-19?

We currently expect and are planning for a full Texans game schedule in 2020. However, if a game is canceled and cannot be replayed, or is played under conditions that prohibit fans from attending, Season Ticket Members will have the option of receiving a full refund or an account credit.

If a fan buys tickets for a game that is cancelled from Ticketmaster or through another source, will the Houston Texans refund those tickets?

Will games be played with social distancing being enforced?

While we are not going to speculate or try to predict today what things will look like in the next few months, we are currently working on our plans and procedures for hosting games. We will make adjustments as necessary in order to conduct games in a safe and efficient manner. We will continue to make decisions based on the latest advice of medical and public health officials, as well as in full compliance with current and future government regulations. We will be prepared to adapt as necessary and will communicate any changes to our fans, players, clubs and communities at the appropriate time.