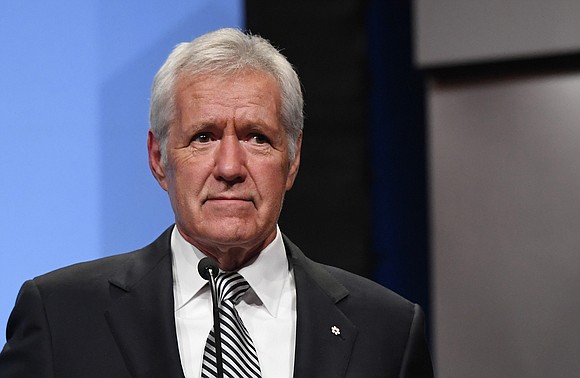 (CNN) -- The answer in the form of a question: Who was a genuinely decent man, a generous philanthropist, an iconic television personality and -- as fellow public savant Neil deGrasse Tysondubbed him -- the "Patron Saint of Geeks?"

The clue, which anyone who watched him during his two decades as the most beloved game show host of our generation, is obvious: It's Alex Trebek, whose passing this weekend tore a ragged hole in our pop culture continuum.

His loss wasn't a surprise. From the moment Trebek announced that he'd been diagnosed with Stage IV pancreatic cancer, the prognosis was grim. But Trebek, who was deeply proud of his record of having missed only one installment of "Jeopardy!" in his 8200-plus episode career -- and that one only because, as an April Fool's prank, he switched gigs for a day with Wheel of Fortune host Pat Sajak -- soldiered on to the very end; he was in the throes of his 37th season of the show when he passed away on Sunday in his Los Angeles home.

He continued despite, as he freely admitted, suffering pain that would send him to his dressing room to break down in tears, and experiencing paralyzing bouts of severe depression that led him to consider just letting go.

These admissions were a part of the regular ongoing updates he gave on his condition. Not because he wanted to be seen as a martyr, but because he knew the public was curious, and he felt they were owed the truth.

This measured transparency about his symptoms was a direct extension of his unique on-air persona. Game show hosts tend to be stereotyped as sunny and anodyne, slick, toothy and insincere cheerleaders for their games and their contestants. Trebek was, by contrast, what one might call a "real one." He was candid in his reactions, always ready to cock an eyebrow at a bad play and to bluntly call out obvious errors in the tones of a disappointed dad.

Yet somehow, he never seemed like a jerk. Though acerbic, his corrections always felt instructive, not destructive. He didn't soft-pedal his delivery of the facts for the sake of making players feel better about themselves, but he also avoided making them feel like the butt of his jokes. He treated his players like adults, capable of making adult decisions -- expecting that those decisions would be good ones, and expressing gentle disappointment when they weren't.

And that, perhaps, might be the greatest gift Trebek left for us, a nation where "Jeopardy!" is frequently a welcome respite from actual jeopardy. A template for how we should behave now, in the wake of the most vitriolic electoral contest in recent memory, in an era that has been the most politically polarized since the 1960s -- or, some might even argue, since the 1860s.

"Alex Trebek provided a sense of consistency we've all been missing in a world of accelerating change and conflict," said Arthur Chu, whose 11-episode victory run in 2014 (and whose playing style drew criticism from some observers) made him the third biggest champion in "Jeopardy!" history. "He was firm but fair, cordial but stern, encouraging but impartial."

In short, Trebek found a way to reject foolishness without making people feel like fools.

Which is exactly the challenge Democrats face now, after the election of Joe Biden as President: Even as we forcefully roll back the consequences of Donald Trump's reign of error, we need to somehow find a way to bring the tens of millions of Americans he piped out into the wilds of conspiracy paranoia and racist vitriol back to the fold of a working democracy.

We won't get there by dispensing empathy and warm embraces, as too many pundits and centrist politicians are currently proposing. One can't just put a bandage on a wet and raging wound; one first needs to treat the infection, apply antibiotics and, where necessary, cut away the rot. As Biden said in his victory speech, a time will come to heal as a nation -- but that time should come after we begin the process of fixing our nation.

"Alex Trebek had one job, and he showed up to do that job every weeknight and never let anything else interfere with it," Chu went on. "It may not sound like a lot, but the past several years have been defined by boundaries blurring and dissolving -- teenagers being politically radicalized by video game streamers, a reality TV personality becoming the President of the United States. So a game show host who refuses to let anything ruin Americans' half-hour of relaxing trivia every evening, feels like the one celebrity upholding a sacred trust that many celebrities have betrayed."

Trebek was open about his political leanings, telling Vulture in 2018 that he identified as an independent, considering himself a social liberal and a fiscal conservative. But unlike game show peers like Sajak andChuck Woolery -- who are the epitome of friendliness on camera but spend their spare time attacking the political left on social media -- Trebek let his actions do his tweeting for him. He gave enormous amounts of time and money to the Christian relief organization World Vision, to the military support group USO, to homeless shelters and environmental conservation causes, and to his alma mater the University of Ottawa, where he endowed the Alex Trebek Forum for Dialogue, to "expose students to a wide range of diverse views" on issues ranging from human rights to globalization to the impact of technology, as befitting a philosophy major turned journalist turned quiz show host.

So if the answer in the form of the question is "What would Alex Trebek do?," here's the clue for all of us, especially those who are mourning him: "Shut up and work."