States crack down as Covid-19 hospitalizations reach an all-time high. But there's good news on the vaccine front 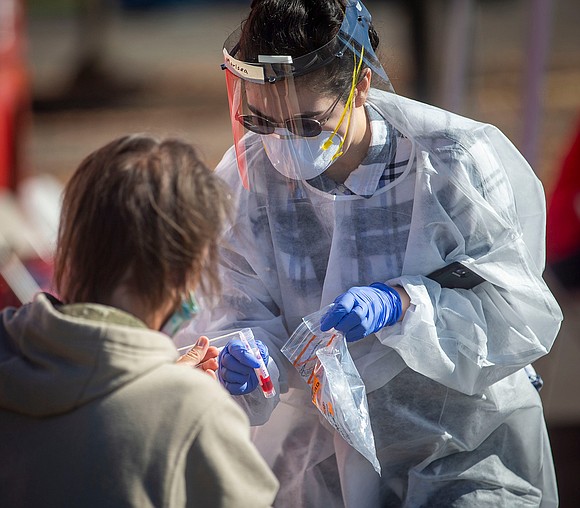 Marissa Gallegos with Medical Teams Northwest takes a swab from a person who was accessing COVID-19 testing at the Lane County Fairgrounds in Eugene, Oregon on October, 8, 2020. Credit: Andy Nelson/Imagn/USA Today

Now, the bad news: Most Americans probably can't get vaccinated until next year.

In the meantime, tens of thousands of lives could either be saved or lost, depending on how people act.

And Covid-19 could become the leading daily cause of death, said Dr. Peter Hotez, dean of tropical medicine at the Baylor College of Medicine.

"It's more than just heading in the wrong direction," he said. "We are on the verge of a humanitarian catastrophe."

Why the 'war' against Covid-19 is getting worse

Much of the current surge is fueled by people hanging out with friends or family who don't live with them -- and wrongfully assuming they're not infected.

US Surgeon General Jerome Adams said all Americans must mask up and double down on safety precautions, as the next few months are expected to be the worst of the pandemic.

"Record cases over the past week will be record hospitalizations soon. Our/ YOUR communities and hospitals simply can not sustain high level care at this rate of increase."

Many hospitals are already running out of health care staff. Major surgeries for non-Covid patients are getting delayed. And some patients are several hours away from the closest available ICU bed.

"We are truly at war with this virus. Our frontline troops are weary, and the enemy has us surrounded," Adams wrote. "We MUST change the rate of rise of cases to alter our rapid rise in hospitalizations & preserve hospital capacity -- and we can," he said.

Nationwide, more than 11 million people in the US have been infected with coronavirus, and more than 246,000 have died, according to data from Johns Hopkins University.

If 95% of Americans wore masks consistently, 68,000 lives could be saved by March 1, according to the University of Washington's Institute for Health Metrics and Evaluation.

The hospitalization record is shattered, again

A record-high 69,864 Covid-19 patients were hospitalized Sunday, according to the Covid Tracking Project.

And the increased case numbers aren't just due to more testing.

The US has averaged 148,725 new Covid-19 cases per day over the past week, according to Johns Hopkins. That's a 31% increase in new cases from the previous week.

But the number of new Covid-19 tests performed has increased only 10.42%, according to the Covid Tracking Project.

A growing number of Republican and Democratic governors have issued new mandates to try to stop the crisis from getting worse.

"Despite the health order that limited mass gatherings to 10 people that was signed in April remaining in effect, we have seen rampant spread of the virus as a result of banquets, wedding receptions, and social gatherings following funerals," the governor said.

"We have seen great tragedy associated with such events. It's not the ceremonies causing the problem. It's the party afterward."

The revised order prohibits dancing or socializing in open, congregate areas. Guests must be seated, and food should be served to them at their seats. No more than 10 people can sit at a table, and those people must be from the same household.

"We need to slow the spread of this virus," said Republican Gov. Kevin Stitt. "Data shows that social distancing is harder to maintain as it gets later at night, especially in bars."

Beginning Tuesday, state employees must wear masks in common areas or when they are close to other workers, Stitt said.

In Michigan, high schools and colleges will shift to remote learning for three weeks. Indoor restaurant dining has been suspended.

And Republican Govs. Doug Burgum of North Dakota and Gary Herbert of Utah are among the latest to mandate face masks across their states.

"Right now, the data demands a higher level of mitigation efforts to reverse this dangerous trends, to slow the spread of the virus, and to avoid the need for any economic shutdowns," Burgum said.

Health experts have lamented the lack of a strong, coordinated federal response to this pandemic. So it's "now up to governors" to enact tough restrictions to get Covid-19 outbreaks under control, two former commissioners of the Food and Drug Administration wrote.

"At least while infections are widespread and surging, governors and local leaders should mandate the use of masks and impose clear and consistent plans to restrict gatherings," Dr. Scott Gottlieb and Dr. Mark McClellan wrote in a Wall Street Journal op-ed.

Many governors have taken aggressive steps to slow the spread," they wrote, "but states that don't act quickly put the entire nation at risk."

'This winter will be hard'

Yes, there's great news with two vaccine trials -- one from Moderna, and one from Pfizer/BioNTech

But let's be clear: There will be no return to normal this year, BioNTech CEO Ugur Sahin said.

"This winter will be hard. We will not have a big impact on the infection numbers with our vaccine this winter," Sahin told the BBC.

But just like the Moderna vaccine, the Pfizer/BioNTech vaccine requires two doses for each person.

So if 50 million doses are available worldwide by the end of this year, that would mean 25 million people could get vaccinated.