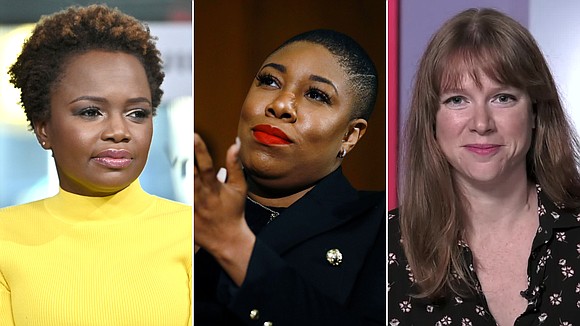 (CNN) -- Several women who worked on Joe Biden's campaign are being considered for top White House communications roles in the Biden-Harris administration, sources with knowledge of the deliberations tell CNN.

Karine Jean-Pierre, a senior adviser to Biden's campaign who later served as chief of staff to Kamala Harris, and Symone Sanders, who served as a senior adviser to the campaign, are under consideration to become White House press secretary. Kate Bedingfield, who served as deputy campaign manager and communications director, is being considered for White House communications director and press secretary.

No final decisions have been made yet and no announcements are expected this week for the roles, which are among the most visible in any administration. Biden pledged during the campaign to bring back the daily White House press briefing, which was scrapped under President Donald Trump's administration.

Jean-Pierre is a name that has been recently added to the mix for the press secretary position. If she or Sanders were to assume the role, either would make history as the first Black woman to serve as White House press secretary.

Jean-Pierre worked for Barack Obama's and Martin O'Malley's presidential campaigns and served as a political analyst for NBC and MSNBC. She would also come to the team with connections in activism following her role as chief public affairs officer at MoveOn.org and on the campaign for the American Civil Liberties Union's Reproductive Freedom Initiative.

Sanders joined Biden's team after serving on Bernie Sanders' 2016 presidential campaign as a national press secretary and following a stint as a CNN contributor. She held a public-facing role as one of Biden's most ardent defenders on television during the campaign. She expressed in her book that she hoped one day to be White House press secretary.

Bedingfield has deeper experience inside the government, having served in the White House as Biden's communications director when he was vice president. Before that, she worked at the Motion Picture Association of America, where she was the vice president of corporate communications, and was the spokeswoman for John Edwards' 2008 presidential campaign.

Biden has begun building out his White House team, announcing several top key roles in the last week. Those announcements, which included two longtime advisers and his campaign manager for the general election, came just days after he tapped veteran Democratic operative Ron Klain as his chief of staff.

Biden has yet to announce any Cabinet positions but pledged repeatedly on the campaign trail and as the President-elect that he will form an administration that reflects the diversity of the country.