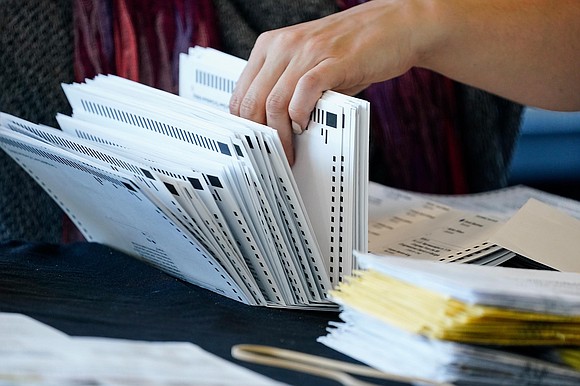 (CNN) -- The Georgia recount for the presidential election, which was scheduled to end yesterday, is expected to confirm Joe Biden's win and find no widespread fraud. But that likely won't be enough to stop President Donald Trump from spreading disinformation about the results.

Throughout the recount, Trump has continued to tweet out falsehoods around Georgia ballots and his campaign has followed suit.

On Wednesday, the Chairman of the Georgia Republican Party David Shafer tweeted that someone monitoring the recount found a "9,626 vote error in the DeKalb County hand count," giving Biden 10,707 votes instead of the correct number of 1,081 votes." He also claimed the "error" could have given Biden's numbers a significant boost in the closely-contested state had it not been caught.

The Trump campaign retweeted the post, feeding Trump's narrative that the recount is a "joke" and rife with fraud.

Facts First: These claims are misleading and need context. State election officials say the county accurately reported its results after Election Day but that there was a mistake made during this week's recount. The error was caught, officials say, and was never at risk of affecting the vote totals reported for either Biden or Trump.

Gabriel Sterling, Georgia's voting system implementation manager, told reporters Wednesday that there are processes in place to catch any human errors and called this "a non-event, non-issue."

Sterling acknowledged there was an error during the recount but that it was detected during the process. The error was then fixed and didn't affect any reported counts.

"This is what happens in an audit," Sterling said when asked about the claim from Shafer. "This is why you don't release interim audit results because human beings are going to make mistakes in a hand count audit. So, the error was discovered, it was corrected."

Sterling also said there are quality control measures inherent in the recount and audit process to prevent any such errors from being included in the final tally.

"It would have been discovered and corrected even without the monitor there to have pointed it out," Sterling said. "We have quality control measures that our audit consultants go through on each one of these tally sheets to make sure you didn't transpose a number, you didn't add a zero, you didn't miss a batch."

DeKalb County Voter Registration and Elections officials have not verified Shafer's claims but DeKalb County CEO Michael Thurmond said in a statement that "If the scenario occurred as Chairman Shafer alleges, this is evidence that the checks and balances, established by Georgia Secretary of State Brad Raffensperger to ensure the accuracy of the election results, performed as designed."