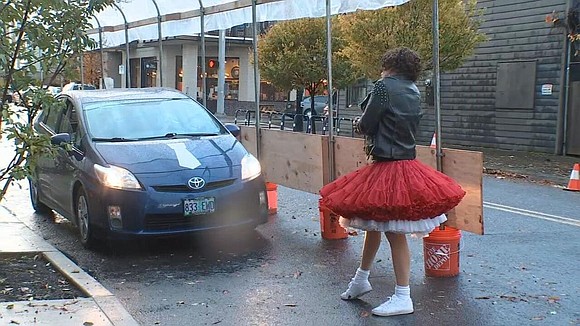 At Shine Distillery, they've set up a drive-through with Drag Queens, who are putting on a show while customers wait. Credit: KPTV

PORTLAND, OR (KPTV) -- Restaurants and bars in Oregon went back to takeout only under Gov. Kate Brown's new statewide freeze. Some businesses are getting creative in how they provide takeout.

At Shine Distillery, they've set up a drive-through with Drag Queens, who are putting on a show while customers wait.

They've also made a canopy so customers don't have to wait in the rain.

Owner Jon Poteet says the distillery and restaurant has been open for about a year, and he's had to get creative in how his business stays profitable during the pandemic.

"Oh yeah, they say the first year in business is the hardest. I believe them now," Poteet said.

He says the distillery rolled into producing hand sanitizer, and now this is another idea he had to keep things going.

"You know, obviously they're going to get a good meal out of it. There should be a little bit of levity to the day, just a few moments of oh, I don't have to think about the storm of stuff that we're in, and we're also going to be helping support some of the LGBTQ performers in our community," he said. "You know the arts have been hit hard by this also."

They'll have various drag queen performers throughout the afternoon into the evening which include Bolivia Carmichaels.

The owner says he'll be continuing the drive-through as long as he has to during this freeze.