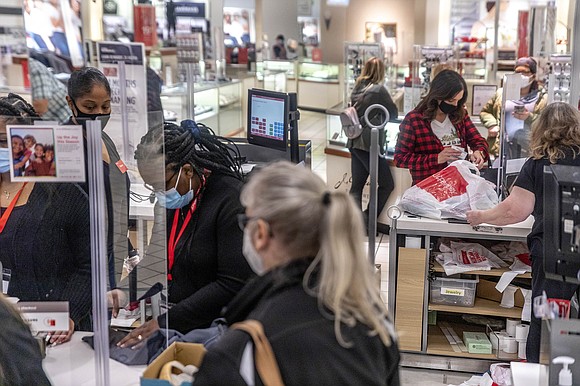 (CNN) -- JCPenney has survived to see it's 119th holiday shopping season. How many more it has ahead of it is tough to say.

In May, the storied department store chain filed for bankruptcy, having been brought to the brink by a combination of the Covid-19 pandemic, unaffordable levels of debt and years of miscalculation and blunders by a constantly changing lineup of top management.

The brand's most recent profitable year was 2010, and net losses have since reached roughly $5 billion.

JCPenney got final approval on its plans to emerge from bankruptcy just last week on the eve of the all-crucial holiday shopping season, thanks to a rescue by mall owners Simon Property Group and Brookfield Asset Management, who will now own and operate the company. Other creditors were willing to accept the store's real estate holdings as payment for what was owed to them.

The bankruptcy process has given the chain the lifeline it needed, slashing its debt and reducing the number of stores to just under 700, down from 846 at the time of the filing. The restructuring also saved an estimated 60,000 jobs, though that represents roughly 25,000 fewer workers from the time the bankruptcy began. The retailer now has the cash it needs to put products on the shelves and run ads online and on television during the holiday season.

"This transaction is a testament to the thousands of dedicated employees who have been working incredibly hard over the last several months under difficult circumstances," said CEO Jill Soltau when the deal with Simon and Brookfield was announced in September. "Our customers are at the heart of JCPenney and we look forward to serving them under the JCPenney banner for decades to come."

But the chain is heading into a holiday season that is likely to be a challenge for many brick-and-mortar retailers.

A rising number of Covid-19 cases and new limits on businesses could again shutdown many of its stores.

Major rivals such as Walmart and Target will be able to stay open through any new shutdowns because they sell groceries and are considered essential, whereas JCPenney will be left with only online sales if stores are forced to shutter. There's also the ongoing challenge of the nation being in a deep recession with millions unemployed, which could cut deeply into sales.

Since the summer of 2011, JCPenney has reported net profits in only five quarters — all of them during the holiday shopping season — and has been unable to make money without that boost in sales. So this is a particularly bad time of year to be hit with these headwinds. But industry experts say the restructuring in the bankruptcy will at least give the brand some time to ride out these challenges.

"I think they're hoping for a good holiday season, but they're not necessarily expecting one," said Neil Saunders, managing director at GlobalData Retail "I think under the new ownership, they have more time."

The new owners were compelled to rescue JCPenney because they couldn't afford to have the anchor tenant at hundreds of their malls close down. The deal with Simon and Brookfield was driven more by self interest than by JCPenney's long-term prospects, said Mark Cohen, director of retail studies at Columbia University.

"Simon and Brookfield are in a world of hurt if those stores go dark," he said. "They have every motivation to keep this alive."

But Cohen said the problems that have dogged JCPenney for years won't be solved simply by the new ownership giving it a new lease on life. He believes that as the economy recovers and new uses for retail spaces emerge, the incentive to keep the chain open could quickly vanish.

Still the reorganization has given the company some breathing room it didn't have ahead of the pandemic, said Reshmi Basu, an expert in retail bankruptcies at Debtwire.

"JCPenney was in negotiations with lenders even before Covid. We didn't know if the company was going to run out of cash," she said. "There was a time during the bankruptcy process it appeared it was barreling towards liquidation. Now there is a plan in place."

But the longer-term problems of consumers shifting from malls to online shopping and greater competition from big box retailers such as Walmart and Target have only been accelerated by the pandemic. And with millions of people working from home and not needing to buy work clothes, JCPenney's dependence on clothing sales makes it particularly vulnerable.

"The brick-and-mortar business model is still very challenged," Basu said. "Even before Covid there wasn't a lot of foot traffic. I don't know what the consumer or the mall is going to look like even after there's a vaccine."