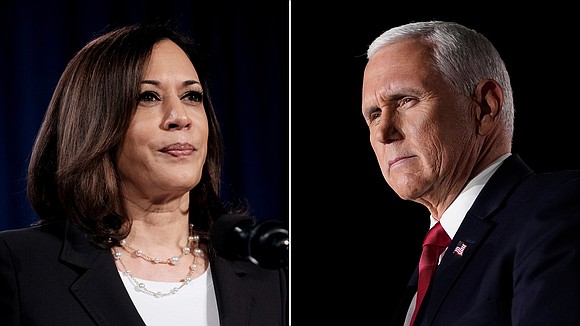 In the first half of the debate, they tangled over the Trump administration's coronavirus response, the economy and the climate crisis.

CNN's team is watching the debate in Salt Lake City and will be fact-checking throughout the night.

Pence claimed that the Trump White House has "always" told the truth about Covid-19.

Facts First: That's false. The Trump administration has not "always" been truthful about the pandemic.

CNN's fact-check reporter Daniel Dale called this "a whopper of a lie." That's because Trump has made hundreds of false claims during the pandemic, including false claims about his travel restrictions, Covid-19 testing, the effectiveness of hydroxychloroquine, the national stockpile of ventilators, and more. In recent weeks, Trump even lied about lying about the virus.

Trump has also admitted, in a series of interviews with Washington Post journalist Bob Woodward, that he concealed the true threat of the coronavirus from the American public earlier this year. Trump said, "I wanted to always play it down. I still like playing it down, because I don't want to create a panic."

Pence claimed Trump "suspended all travel from China" in response to the coronavirus pandemic.

Facts First: This is false. While Trump did restrict travel from China, his policy was not an actual "ban": It made exemptions for travel by US citizens, permanent residents, many of the family members of both groups and some others.

The New York Times reported in April that nearly 40,000 people had flown to the US from China since the restrictions went into effect in early February.

You can read more here about the travel restrictions Trump imposed on China here.

"The President said it was a hoax," Harris claimed in criticizing the administration's downplaying of the coronavirus.

Harris is likely referring to Trump's comments during a February rally, which the Biden campaign portrayed as Trump calling the coronavirus a "hoax" in a September campaign ad.

Facts First: This is misleading. Taken in totality, Trump's comments at the February 28 rally indicate that he is deriding Democrats for attacking his performance on the coronavirus. A full 56 seconds pass between the two clips the campaign ad edited together.

In this section of his rally speech, Trump began by saying that "the Democrats are politicizing the coronavirus," ridiculing Democrats for attacking his administration's performance addressing the virus. The President then compared this attack to the investigation into Russian meddling in the 2016 election and calling his impeachment a "hoax."

Here is what Trump said in full:

The next day Trump was asked about this comment and tried to clarify what he said, claiming he was "referring to the action that [the Democrats] take to try and pin this on somebody, because we've done such a good job. The hoax is on them."

That said, Trump's clarification has not stopped some of his supporters from believing the pandemic is, in fact, a hoax. One Trump supporter attending a campaign rally in Michigan on September 10 was asked by CNN's Jim Acosta why he was not wearing a mask. "Because there's no Covid," he said. "It's a fake pandemic created to destroy the United States of America."

"Biden opposed that decision. He said it was xenophobic," Pence said.

Given the timing of Biden's remarks, it's not unreasonable for Pence to infer that the former vice president was talking about the travel restrictions. But Biden never took an explicit position on the restrictions until his April declaration of support.

You can read more about Biden's comments here.