A record-setter. A patent holder. Eddie Van Halen's achievements are as legendary as his guitar playing 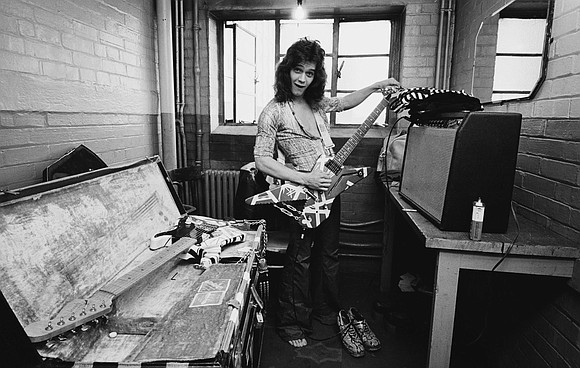 (CNN) -- Even in the decadent 80s, known for its over-the-top guitar shredding and showmanship, Eddie Van Halen was a towering presence.

Yes, he was just as flashy as the rest of his big-haired brethren, but he was by no means a flash in the pan.

His fingers didn't just run up and down the fretboard, they sprinted.

And when he played triplets on the iconic "Eruption" -- using both hands to tap the notes -- it was a clear message to all other members of the Club of Lightning Fast Guitar Solos: Beat it.

As the music world mourns his death, it's an apt moment to revisit some lesser-known Van Halen facts.

He got his start on the piano and drums

Although Van Halen will forever be known for his virtuoso guitar playing, he got his start with a different instrument. Along with his older brother, Van Halen received piano lessons at an early age. For three years, he won first place at an annual piano competition in California, starting in 1964.

After his brother, Alex, switched to the guitar, Van Halen bought a drum kit. But his natural talent with the guitar prompted his brother to ask them to switch again.

According to the Eddie Van Halen Birthday Special newsletter: "When Alex started to then learn to play drums, overtaking Eddie's own abilities, the younger of the two switched to guitar instantly becoming attached to it -- locking himself away in his bedroom as a teen to practice, and walking around the house with his guitar strapped on yet unplugged."

The two brothers would form the core of what would later become Van Halen -- through four turbulent decades of platinum albums, sold out tours and a revolving door of singers.

Van Halen learned everything he knows from observing other musicians.

In one interview, he talked about how he'd improvise during piano recitals.

"Ninety percent of the things that I do on guitar, if I had taken lessons and learned to play by the book, I would not play at all the way I do," he once said.

He's named after another legendary musician

He had an initially uncredited role on Michael Jackson's 'Beat It'

Van Halen's guitar and backing vocals made cameos in many other artists' tracks (including Frank Sinatra's.) But one of his most memorable contribution to music history is his 20-second blazing solo on Michael Jackson's "Beat it."

It took half an hour to record, and he did it for free, as a favor to producer Quincy Jones, while the rest of his Van Halen bandmates were out of town.

"I said to myself, 'Who is going to know that I played on this kid's record, right? Nobody's going to find out.' Wrong!" he told CNN. "Big-time wrong. It ended up being Record of the Year."

In 1983, Van Halen performed with his band on "Heavy Metal Day" at the US Festival in San Bernardino, California. They made $1.5 million for the 90-minute set.

At the time, the Guinness Book of World Records recognized it as the highest paid single appearance of a band.

In an interview with Guitar World in 2014, Van Halen said:

"I remember hearing a DJ on the radio saying that we made so much money per second," he told Guitar World in 2014. "What he didn't realize is that we put every penny of that into the production."

The man who created the Frankenstrat (a cross between a Fender and a Gibson guitar) holds three different patents -- all of them having to do with guitars.

His first patent in 1987 was for a supporting device that allowed the musician to perform hands-free "thus allowing the player to create new techniques and sounds previously unknown to any player."

In 1997, he got his second patent for a "guitar peghead." And in 2017, his third patent was for a "stringed instrument with adjustable string tension control."

He once used a power drill as an accompanying soundtrack

Musicians can get creative when it comes to getting that perfect sound.

Van Halen took it one step further: incorporating the sound of a power drill into "Poundcake." You can hear it in the song's introduction and guitar solo.

As biographer Kevin Dodds wrote: "(Van Halen's) guitar tech Matt Bruck was using a drill when Edward had a brainstorm and noticed that the drill channeled through the pickups at a specific tone."

His band really did ban brown M&Ms from backstage

The M&Ms story has followed Van Halen their entire career, and it's actually true.

In the band's list of requests, also known as a contract rider, there was a clause forbidding any brown M&Ms backstage. The reason: It was the band's way of ensuring the venue paid close attention to the document.

"If I came backstage, having been one of the architects of this lighting and staging design, and I saw brown M&Ms on the catering table, then I guarantee the promoter had not read the contract rider, and we would have to do a serious line check," said singer David Lee Roth.

He is one of the greatest guitarists in rock history

In 2007, Van Halen was inducted into the Rock and Roll Hall of Fame. This year, Guitar World placed him 4th in its annual poll of 100 Greatest Guitarists of All Time.