BlackRock is soaring as investors plow money into ETFs 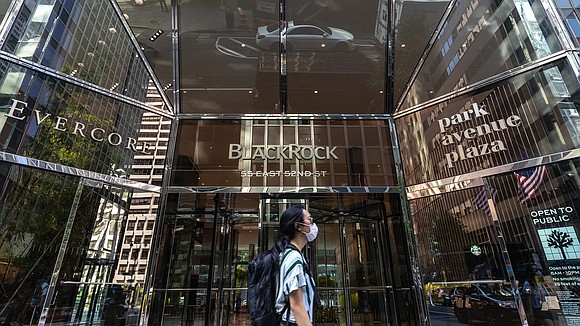 (CNN) -- BlackRock, the owner of the wildly popular iShares family of exchange-traded funds and the world's largest asset manager, has gotten even bigger during the Covid-19 pandemic. BlackRock said Tuesday that it now has $7.8 trillion in assets under management, a 12% increase from last year.

The continued allure of passively managed index funds is a big reason why BlackRock is thriving during these volatile times for the market. BlackRock said that iShares raked in $2.3 trillion in assets during the third quarter — and nearly 70% of that total was for stock funds.

Shares of BlackRock rose more than 4% on the news. BlackRock's stock has now surged nearly 30% in 2020 thanks to its strong results.

BlackRock, like most major Wall Street firms, has had to adapt during the coronavirus outbreak.

On a conference call with analysts, BlackRock Chief Financial Officer Gary Shedlin said the company was "able to very quickly migrate from 16,000 people in 60 offices to 16,000 people and 16,000 offices." He added that only about 6% to 7% of its staff is back in the office.

But Fink said that he is now working from BlackRock's New York headquarters about three times a week and that he found the experience to be "very productive and incredibly energizing."

The asset management company is also thriving at a time when most other Wall Street investment banks are struggling.

JPMorgan Chase, despite posting solid results of it own Tuesday morning, is still down more than 25% this year. Shares of rivals Citigroup, Bank of America and Goldman Sachs are all in the red for 2020 as well.

Fink said during the conference call with analysts that he was encouraged by an "improving macro backdrop" that has fueled the broader stock market rally — and the big surge in large tech stocks in particular — over the past few months.

Still, Fink cautioned that investors will "need to navigate growing risk in the coming months." He pointed to concerns about the restarting of economies globally, a lag in stimulus in the US and the potential for the results of next month's election in the US impacting economic policy.

He also said that there continues to be a "silent crisis of retirement" in the US, as many older investors lack the financial resources that they need for their post-work years.

Along those lines, Fink said that many older investors will need to be more aggressive with their retirement savings. US Treasury yields are painfully low because of the Federal Reserve keeping interest rates at zero. A 10-year bond yields less than 0.75%.

"There's no question ... government bonds are going to play less and less of a role for most retirement portfolios," Fink said. "You certainly would not use government bonds for income purposes."