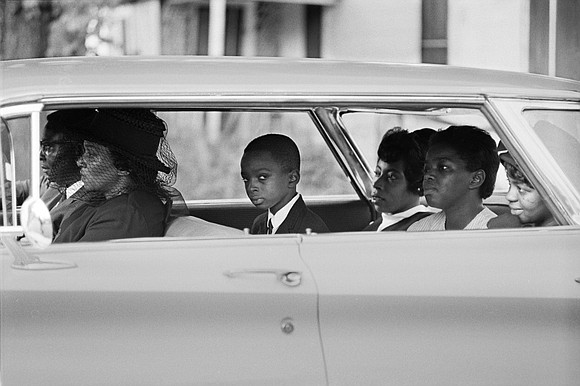 Ben Chaney, center, in the car on the way to his brother's funeral, August 1964, Mississippi. Credit: Bill Eppridge/PBS

(CNN) -- "Driving While Black" has a specific modern meaning. "Driving While Black: Space, Race and Mobility in America" turns out to be an extremely rich and detailed PBS documentary, exploring the long history of restrictions on Black movement, from slavery through the present. As part of that journey, the two-hour film addresses not only modern-day issues of policing but deeper ones about the American Dream denied.

There is, inevitably, a section devoted to the period covered by the controversial Oscar-winning movie "Green Book," including the fascinating background of New York City mailman Victor Hugo Green, who came up with the idea of a publication telling African-American motorists where they could safely stay and buy gas when traveling in the South. As the film makes clear, it's indicative of the ingenuity and entrepreneurial spirit that grew up around navigating the Jim Crow era.

The range encompassed by "Driving While Black," however, is much broader than that, beginning with the way slaves were carefully monitored, as well as the impact of the Fugitive Slave Act of 1850, which allowed slave owners to seek the return of those who escaped to the North, a significant contributor to the tensions that led to the Civil War.

The advent of the automobile brought new possibilities, but also highlighted inequality at virtually every turn. While whites "discovered the joys of the open road," as journalist Alvin Hall says -- with advertising jingles like "See the USA in your Chevrolet" -- Blacks saw cars as the means to achieving a better life, while using what they drove as a symbol of their status, especially to folks back home when they visited.

The introduction of interstate highways, similarly, disproportionately impacted Black neighborhoods, devastating many as their construction was designed to plow through them.

Directed by historian Gretchen Sorin and filmmaker Ric Burns, "Driving While Black" conveys the fear associated with having to adhere to "invisible rules" of where Blacks could go and stay, a dynamic that has evolved into the era of modern policing.

"Driving While Black" thus becomes an expansive examination of the African-American experience, then and now, with a final portion devoted to policing that not only drives the point home but directly connects the past to the present.

"Americans love to celebrate their history, but they don't like to look at it very closely," historian Craig Steven Wilder says. That's a shortcoming that "Driving While Black," for those who take the time to watch it, meticulously works to correct.