The US has reached 8 million Covid-19 cases, and the pace of new infections signals a tough winter 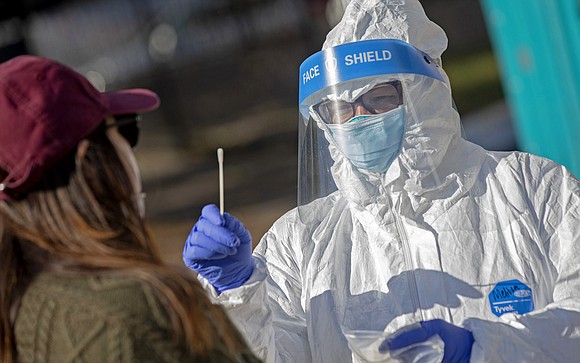 The US is approaching 8 million Covid-19 cases and the pace of new infections signals a tough winter. /Credit: Matt Stone/Media News Group/Boston Herald

(CNN) -- The United States on Friday surpassed 8 million recorded Covid-19 cases -- a milestone that comes as daily infection rates are rising, which experts say is setting the country up for a very difficult winter.

The country has recorded more than 8,008,000 cases, Johns Hopkins University says. That total is likely a vast undercount, largely because of a low testing capacity early in the pandemic, researchers have said in several reports.

Perhaps more immediately concerning than Friday's milestone is a recent rise in cases per day. The country's one-week average of new daily cases has moved above 53,000 -- an increase of more than 55% in just over a month, Johns Hopkins data show.

Dr. Anthony Fauci, the nation's top infectious disease expert, has warned that is far too high heading into the end of the year.

"You can't enter into the cool months of the fall and the cold months of the winter with a high community infection baseline," Fauci said in a John Hopkins virtual event posted Friday.

Fauci and other public health officials have warned the country should try to lower its daily cases to prepare for new challenges. Those include the flu season, which could create what doctors call a "twin-demic" with Covid-19; as well as temptations to hold more gatherings indoors as temperatures drop, including during the holidays.

But the national case trend isn't the only thing concerning experts.

• The country's average test-positivity rate over a week has moved above 5%, the Covid Tracking Project says. The CDC's director previously suggested that communities' rates should be below 5% to comfortably have schools open

And test positivity is much worse in certain states -- sitting above 20% Friday in Idaho, Iowa, South Dakota and Wisconsin. Experts including Fauci have said rising positivity rates predict surges in cases, hospitalizations and deaths.

An updated forecast from the University of Washington's Institute for Health Metrics and Evaluation projects the US could reach more than 389,000 total Covid-19 deaths by February 1. More than 217,000 people have already lost their lives to the virus in the US.

'The virus is now winning'

More than 30 states accumulated more new Covid-19 cases this past week compared to the previous week, according to data from Johns Hopkins.

New Mexico's governor called her state's coronavirus situation "the most serious emergency that New Mexico has ever faced" Thursday.

The state's test-positivity rate was 8.1%, she said. It's average of new daily cases over a week -- 457 as of Thursday -- is more than 400% higher than it was at one point in early September.

That comes just days after she issued new restrictions to help curb the spread of the virus -- including a limit on mass gatherings and a 10 p.m. closing time for establishments serving alcohol.

In parts of the state, ICU beds are "full," according to New Mexico Health and Human Services Secretary David Scrase.

"This is a serious time for the state of New Mexico," Scrase said, adding the state's curve for seven-day average daily cases was "dwarfing previous curves."

It doesn't have to be this way. Experts have repeatedly said that doubling down on simple safety measures including masks, social distancing and hand washing can help slow transmission of the virus.

Universal mask wearing could save the lives of more than 70,000 Americans in the next three and a half months, according to IHME projections.

And as cooler weather approaches, experts say, there are ways you can see some friends and family while still staying safe.

World Health Organization officials announced Thursday the antiviral drug remdesivir has "little or no effect on mortality" for patients hospitalized with Covid-19.

The agency says this is "conclusive evidence" about the drug -- and the findings are disappointing.

Until now, remdesivir was the only drug that appeared to have specific effects for Covid-19 and the only drug with an emergency use authorization specifically for the virus from the US Food and Drug Administration.

Prior to the WHO's study, a large controlled study of remdesivir in the US found that it shortens recovery time by about a third in severely ill, hospitalized adults with Covid-19, but does little to help those with milder cases.

Gilead Sciences, the drug's maker, said the findings did not mean the drug is of no benefit.

"The emerging data appear inconsistent with more robust evidence from multiple randomized, controlled studies published in peer-reviewed journals validating the clinical benefit of Veklury (remdesivir)," Gilead said in a statement. "We are concerned that the data from this open- label global trial have not undergone the rigorous review required to allow for constructive scientific discussion."