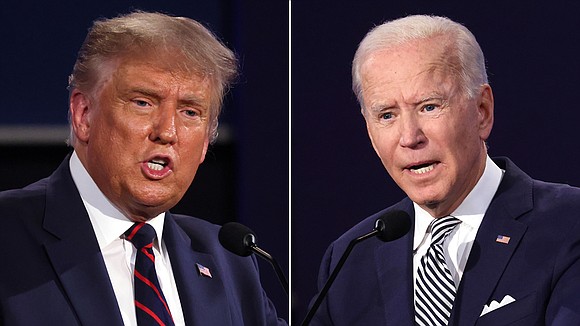 President Donald Trump enters the final presidential debate in need of a major shakeup that will change the trajectory of the race as he trails Joe Biden in both national polls and key swing states that will determine whether he has a path to victory in the Electoral College. Credit: Getty

(CNN) -- Thursday's final presidential debate may be the last opportunity for both President Donald Trump and former Vice President Joe Biden to reach a massive national audience before Election Day.

In the first debate, Trump's dishonesty eclipsed Biden's misstatements, as the President repeated some of his more frequent lies while talking over both his opponent and the moderator. In an attempt to avoid some of the chaos of that first encounter, each candidate's microphone will be muted during portions of Thursday's debate to allow their opponent to answer questions uninterrupted.

NBC's Kristen Welker is moderator for the 90-minute event and plans to focus on six main topics. On the first announced topic, fighting Covid-19, Trump has consistently misled the American public, including as recently as his "60 Minutes" interview. During an excerpt which the President released ahead of the episode's airing this weekend, Trump falsely claimed the US has turned the corner on the pandemic.

Among the other topics that Trump and Biden will be asked to address tonight are race in America, climate change, national security, American families and leadership.

CNN will be fact-checking both candidates throughout the night.

Trump: Coronavirus is 'going away'

Trump claimed the virus is going away. "We're rounding the corner. It's going away," Trump said.

Facts First: This is false. The US coronavirus situation -- as measured by newly confirmed cases, hospitalizations and the test positivity rate -- is getting worse, not better. There is no basis for his vague claim that we are "rounding the corner."

Trump has baselessly claimed for eight months that the virus would disappear or was currently disappearing.

Trump: 2.2 million people were initially expected to die from coronavirus

Facts First: This is false.

Trump is likely citing a report posted in March by scholars from the Imperial College in London that predicted that a total of 2.2 million Americans could die from Covid-19 if no preventative measures were installed on any level of society.

In other words, that would be the loss of lives if no action were taken at all to mitigate it.

The report did not analyze what would happen if just the federal government took no action against the virus but rather what would occur if there were absolutely no "control measures or spontaneous changes in individual behavior."

"When I closed and banned China from coming in ... he was saying I was xenophobic, I did it too soon," Trump said.

The campaign says Biden did not know about the restrictions at the time of his speech, since his campaign event in Iowa started shortly after the Trump administration briefing where the restrictions were revealed by Health and Human Services Secretary Alex Azar.

Given the timing of the Biden remarks, it's not unreasonable for the Trump campaign to infer that the former vice president was talking about the travel restrictions. But Biden never took an explicit position on the restrictions until his April declaration of support.

Trump: He was 'kidding' when he suggested injecting bleach

Biden attacked Trump on comments he made over disinfectants and the coronavirus.

"What did the President say? He said don't worry, it's going to go away. Be gone by Easter. Don't worry...Maybe inject bleach," Biden said. "He said he was kidding when he said that but a lot of people thought it was serious."

Trump replied that he "was kidding on that."

Facts First: This is false. There was simply no indication that Trump was being anything less than serious when he made comments in April in which he wondered if it would be possible for people to inject disinfectants to fight Covid-19. The next day he claimed he was being sarcastic.

During an April 23 press briefing, Trump expressed interest in exploring the possibility of "injection inside or almost a cleaning" with disinfectants.

Here's what he said: "[T]hen I see the disinfectant, where it knocks it out in one minute. And is there a way we can do something like that, by injection inside or almost a cleaning, because you see it gets in the lungs and it does a tremendous number on the lungs, so it'd be interesting to check that, so that you're going to have to use medical doctors with, but it sounds interesting to me."

The next day Trump claimed he was "asking a question sarcastically to reporters like you just to see what would happen."

Facts First: This is false.

Trump was seemingly trying to raise an allegation previously made against Joe Biden's son, Hunter Biden, but there's no connection to Joe Biden.

A partisan investigation conducted by Senate Republicans, whose report was released this month, alleged that Elena Baturina, a Russian businesswoman and the wife of late Moscow mayor Yuri Luzhkov, sent $3.5 million in 2014 to a firm called Rosemont Seneca Thornton, and that the payment was identified as a "consultancy agreement." The report did not provide any further details about the transaction.

Neither the Senate report nor Trump have provided any evidence that the payment was corrupt or that Hunter Biden committed any wrongdoing.