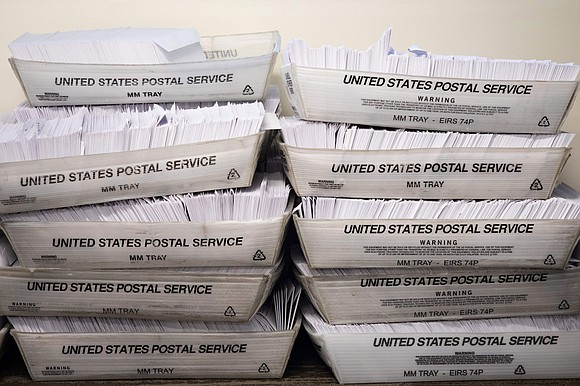 (CNN) -- With less than two weeks to go before Election Day, many voters around the country have still not received their mail-in ballots.

Printing errors, mail delivery delays and the sheer volume of requests have left many states across the country scrambling to get ballots into the hands of voters ahead of the fast approaching deadline.

Voters in Ohio have seen delays thanks to a ballot printing backup. In Michigan, a state that has already seen 3 million absentee ballot requests, 20,000 absentee ballots have yet to be sent out. In addition to printing and mail delivery delays, some counties had to reprint and re-send ballots, including Pennsylvania's Allegheny County -- further squeezing the window for voters to get their ballots returned in time.

Voters who say they requested their absentee ballots in a timely fashion are frustrated and confused to find themselves still waiting, just a week before the recommended US Postal Service deadline for getting ballots back in the mail.

Lee Zacharias, 75, from Greensboro, North Carolina, never received her absentee ballot. She wanted to vote via absentee because of her compromised immune system, but ended up risking her health, and voting in-person because she felt that it was getting too close to the deadline.

According to BallotTrax, a new tool North Carolina voters can use to keep up with their ballot status, Zacharias' initial ballot was outbound on September 11. When that one didn't show up, she called the Guilford County Board of Elections on September 28. Zacharias said she was told BallotTrax isn't always accurate, but to be safe the county would cancel her original ballot and send her a new one. When that ballot didn't arrive, Zacharias decided to cast her vote in person because she was nervous that it would never show up.

"The fact that I know that mine is not the only case. That there are a number of other people that have not received absentee ballots they applied for, who had ballots that disappeared, like mine did and have been voided and have not receive replacement ballots makes me angry," Zacharias said.

Terri Alberte Hallaman, a retiree living in Bath, Ohio, is another voter who's still waiting. She told CNN it's been nearly 20 days since a ballot tracking app created by her board of elections told her that her absentee ballot was processed. "I am concerned how long it is taking," she said, adding that she's debating whether to keep waiting or, like Zacharias, just go to vote in person.

The problems in Ohio stemmed in part from a single printing company's trouble keeping up with demand. Midwest Direct, a Cleveland-based printing company, was contracted to help 16 Ohio counties and two Western Pennsylvania counties.

The company's CEO, Richard T. Gebbie, said the reason there has been delays in sending out absentee ballots is because of the unexpected volume of requests.

"It is fair to say today that no one -- not the various boards of elections, not Ohio's Secretary of State, not our company -- anticipated the staggering volume of mail-in ballot requests that has actually occurred," Gebbie wrote in an October 15 statement. "The estimates provided to us from the counties were not what ended up as the reality."

The delays weren't discovered until early October, leaving officials scant time to come up with a fix.

"A few days into early voting, we began hearing from Ohio's county boards of elections about potential delays in the delivery of their ballots," Maggie Sheehan, press secretary for Ohio's secretary of state, told CNN. She added that some counties had switched to in-house printing to speed things along.

For example, the board of elections in Summit County, Ohio, where Alberte Hallaman votes, reported on October 9 that Midwest Direct advised them of a "delay in the mailing of ballots" and that voters should not expect to start receiving their absentee ballots in the mail until at least October 13, seven days after the early voting period started. Of the 95,000 absentee ballots that Midwest Direct was responsible for, only 12,250 had been delivered to voters as of October 11.

The company was also responsible for the delays in Allegheny, where a ballot image mapping error made by Midwest Direct led to 28,879 voters receiving incorrect ballots.

"Division staff immediately reached out to Midwest Direct, our vendor which the county contracted with to handle the printing, collating and mailing of ballots, about the problem," Allegheny Elections Division manager Dave Voye said in a statement. "The company was directed to suspend mailings immediately and to begin investigating what occurred."

The misprinted ballots were part of a group of 32,318 ballots that had been sent out on September 28. Voters were expected to receive new, corrected ballots this week.

The delays have prompted officials to begin encouraging voters to make backup voting plans, including voting in person.

Georgia Secretary of State Brad Raffensperger had a message during a Monday news conference for voters who were still waiting: "I would encourage you then to vote early and show up. The counties can check you off the absentee ballot list and you can vote."