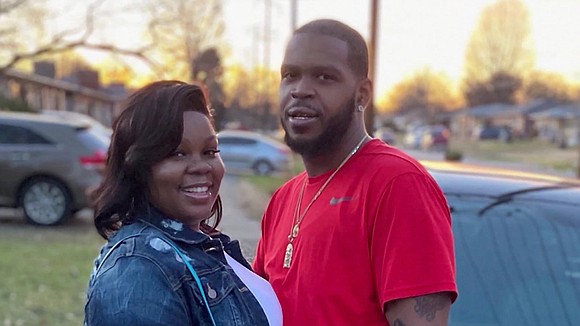 (CNN) -- The Breonna Taylor grand jury was not given an opportunity to consider homicide charges in the case against police officers who served a no-knock warrant at her home the night she was killed, an anonymous member of the panel said Tuesday.

"The grand jury did not have homicide offenses explained to them," the first anonymous grand juror wrote in a statement issued by attorney Kevin Glogower. "The grand jury never heard about those laws. Self-defense or justification was never explained either."

The rare statements -- grand juries are intended to be secret, with some exceptions -- followed the ruling of Jefferson County Circuit Court Judge Annie O'Connell and sheds further light on a case that has led to protests across the country and exemplified the ways that the "war on drugs" disproportionately hurts Black Americans.

The 26-year-old Taylor was fatally shot by Louisville Metro Police Department officers who broke down her apartment door during a botched drug raid on March 13.

The grand juror said the panel was only presented with wanton endangerment charges against one officer involved the police shooting in March.

"Questions were asked about additional charges and the grand jury was told there would be none because the prosecutors didn't feel they could make them stick," the first juror's statement said.

"The grand jury didn't agree that certain actions were justified, nor did it decide the indictment should be the only charges in the Breonna Taylor case. The grand jury was not given the opportunity to deliberate on those charges and deliberated only on what was presented to them. I can't speak for other jurors, but I can help the truth be told."

A second grand juror, who also stepped forward to ask about speaking publicly about the case, echoed the first juror in a statement Thursday. The second panel member said the jury was only allowed to consider three wonton endangerment charges against one officer.

"No opportunity to consider anything else was permitted," the grand juror said, adding that they agreed "wholeheartedly" with the first juror's statement and looked "forward to continuing to help set the record straight."

Cameron posted a statement on Twitter that said he will not appeal the ruling.

He said he asked the grand jury for an indictment on charges he thought could be proven in court.

"Indictments obtained in the absence of sufficient proof under the law do not stand up and are not fundamentally fair to anyone," he wrote.

He also wrote that "causation, justification and (other legal issues) were always at the forefront" of his office's investigation.

The attorney general has acknowledged wanton endangerment was the only charge his prosecutors recommended to the grand jury. Cameron has said prosecutors presented all evidence, even though the facts showed use of force by two officers not charged was "justified" because they were fired upon.

Sam Aguiar, a lawyer for Taylor's family, said in a statement: "Daniel Cameron should be ashamed of himself. He made a decision based upon a political agenda."

Aguiar added that Cameron, a rising star in the Republican Party, "tried to hide behind secrecy rules and now his lies got exposed. Everything he's done has been an abuse of the system. Breonna's Taylor's family deserves and is entitled to a prosecutor committed to doing the job with morals, ethics and a commitment to the law."

Ben Crump, another attorney for Taylor's family, on Tuesday reiterated his call for the appointment of a new independent prosecutor.

O'Connell wrote in her opinion that "justice requires disclosure of the grand jury proceedings in this case."

"There exist additional interests to consider in making this decision: the interest of the citizens of the Commonwealth of Kentucky to be assured that its publicly elected officials are being honest in their representations; the interest of grand jurors, whose service is compelled, to be certain their work is not mischaracterized by the very prosecutors on whom they relied to advise them; and, the interest of all citizens to have confidence in the integrity of the justice system," O'Connell wrote.

Cameron's office had requested a stay of any court order allowing the juror to speak out publicly until after a potential state appeal.

O'Connell said that while grand jury proceedings are normally secret "traditional justifications for secrecy in this matter are no longer relevant" and that "the ends of justice require disclosure."

"There is little concern that releasing the remaining undisclosed grand jury proceedings would create that effect," O'Connell wrote.

"Rather, it is more likely that the already highly public nature of this matter (generated in part by the Attorney General's own press releases, interviews and press conferences), and not the release of grand jury proceedings, would have that consequence."

AG released about 15 hours of audio

Cameron's office argued that allowing the grand juror to speak may compromise the right to a fair trial of the one officer who was charged in connection with the incident, Brett Hankison.

But O'Connell said Hankison did not join the argument or raise the issue himself, so she ruled that she cannot find that the concern is "founded in reality."

Hankison was charged with three counts of felony wanton endangerment but none of the officers involved in the raid were directly charged with Taylor's death. Hankison has pleaded not guilty to those charges. No other officers were charged.

His attorney, Stew Mathews, had no comment on Tuesday.

Cameron said earlier this month that he would appeal if O'Connell allows the juror to speak out.

The anonymous juror sought in court the release of information and documents reviewed by the grand jury as well as a "binding declaration" outlining the rights of grand jurors' public disclosures about the case. The attorney for the juror says what was presented to panel is not being publicly disclosed.

Cameron's request for a stay would have stopped the juror from speaking out while the state appeals the case or seeks additional relief, according to the filing.

Cameron's argued in a court filing that a failure to pause proceedings before the state could appeal "would immediately result in irreparable harm."

"Grand jury secrecy has existed for centuries. Research has not revealed any Kentucky case permitting a grand juror to violate his or her oath, and the most analogous case from a sister state denied a similar request. There is no doubt that the question presented is substantial and is surely deserving of appellate review," the document continues in part.

Some legal experts have said it's curious Cameron didn't seek any of Kentucky's homicide charges to begin with. And CNN senior legal analyst Laura Coates said earlier this month that it's rare for grand juries to go beyond the statutes a prosecutor presents.

Glogower had called on O'Connell to release further grand jury material and the juror from secrecy.

In response, attorney Victor Maddox argued on behalf of the Commonwealth of Kentucky that the secrecy surrounding grand juries is "fundamental" to the criminal justice system.

Maddox argued that a decision to release further material, as well as to release this juror from secrecy, would be "breaking with centuries of precedent" on both the state and national level. He also said the release of such information could challenge Hankison's right to a fair trial.

Cameron led the investigation into the police killing and presented evidence in the case to a Jefferson County grand jury over two-and-a-half days.

After a court ordered Cameron to do so, the Attorney General released roughly 15 hours of audio recorded while jurors reviewed evidence like 911 calls and body camera videos and asked questions.

However, the recordings do not include juror deliberations or prosecutors' recommendations and statements, Cameron said.

Glogower previously told CNN that the released recordings are missing some key information.