Artificially sweetened beverages may not be a heart-healthy alternative to sugary drinks, a new study found. Credit: Shutterstock 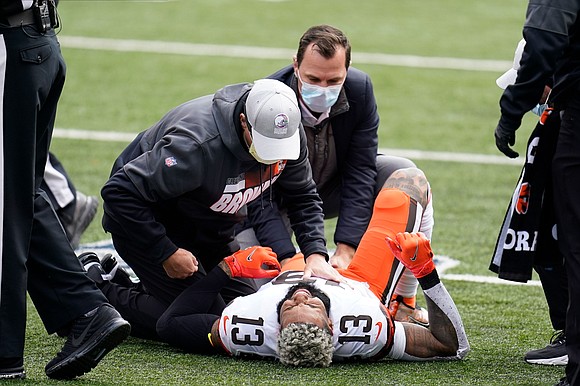 (CNN) -- The injuries continue to pile up in the NFL.

Cleveland Browns wide receiver Odell Beckham Jr. is the latest player who will be forced to sit out with a season-ending injury.

The team said that an MRI on Monday confirmed that Beckham, 27, suffered a torn ACL in his left knee during the team's win over the Cincinnati Bengals on Sunday.

Beckham was injured when quarterback Baker Mayfield's first pass of the game was intercepted by the Bengals' Darius Phillips.

Beckham attempted to chase Phillips down and make a tackle and hit the turf while clutching his knee in pain. He limped to the locker room afterward.

Mayfield acknowledged Beckham following the game, posting on Instagram: "A win is a win. That one was for you 13."

"My heart hurt!!!!! I love you brudda," teammate and longtime friend Jarvis Landry said in a post.

Beckham, who was playing in his seventh season in the NFL, finishes the year with 23 receptions for 319 yards and three touchdowns, with another 72 yards coming on the ground with a rushing touchdown. The former NFL Offensive Rookie of the Year, Beckham has been named second-team All-Pro two times while being selected to the Pro Bowl three times.