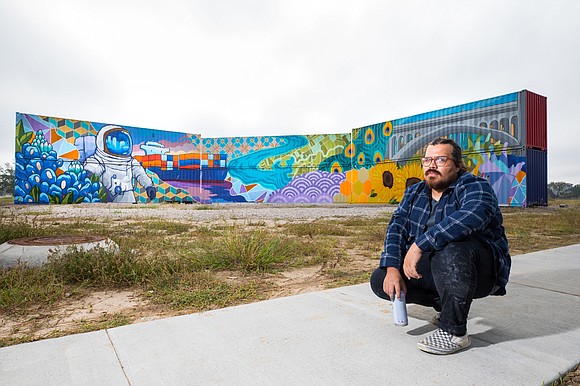 Inspired by the surrounding Historic Fifth Ward and East End neighborhoods, the East River mural represents the power of the bayou and its ability to connect the city’s diverse communities. Mosaic tiles, beehives promoting sustainability and wellness, and an astronaut nodding to Houston’s strong ties with NASA are all included in the intricately detailed piece. Following a months-long design process, Maldonado spray-painted the mural on-site at East River over a two-week period, using six shipping containers as his canvas.

“Touching on the ideas of personal home, culture and history, this mural represents the merging components within East River’s carefully designed, multiphase, mixed-use development,” said Shannon Bedinger, Midway’s Senior Vice President of Marketing + Communications. “Our hope is that it serves as a legacy reminder of local talent and the power of the arts to create community.”

Artist David Maldonado is known for his vibrant colors, intricate details and ability to unify diverse communities through art. Drawing inspiration from folk art, street culture, and the Mexican muralist movement, he has developed a well-recognized style that has led him to work with companies and brands such as Adidas, The Houston Astros, The Houston Texans, The Houston Maritime Museum, Jack Daniels, The National Institute of Aerospace and NASA. Maldonado is also the founder of Pan Dulce HTX; a monthly creative night open to the community of Houston by partnering with local artists, poets, musicians, and non-profit organizations.

“Public art is, on its surface, beautiful artwork; but the value of art in the public space is its ability to create conversations. It builds connections and gives people a sense of pride in their city, their neighborhood, and themselves,” added Bedinger.

The cornerstone of each destination Midway creates is an expertly designed and activated public space, intended for people to connect in new, transformational ways. Public art continues to enliven Midway’s portfolios, with the latest addition being the vibrant mural at East River. This street art inspired work joins several pieces in GreenStreet’s rotating art program, which includes “Ascending Focus” by Foo Skou, a massive interactive visual and sonic score that can be played on your iPhone; “#StickTogetherHOU”, a work aggregating thousands of Post-it® notes with local heroes’ names submitted by the public; and a dynamic video lobby program currently featuring award-winning digital artists Chris Doyle and Kevin Cooley, among others. Another portfolio highlight, Century Square’s Aggieland mural in College Station has become a local icon. At CITYCENTRE, each season is refreshed with rotating exhibitions of museum-quality regional, national and international artists in the office towers, including works by Christiane Baumgartner, Tommy Fitzpatrick and MANUAL.