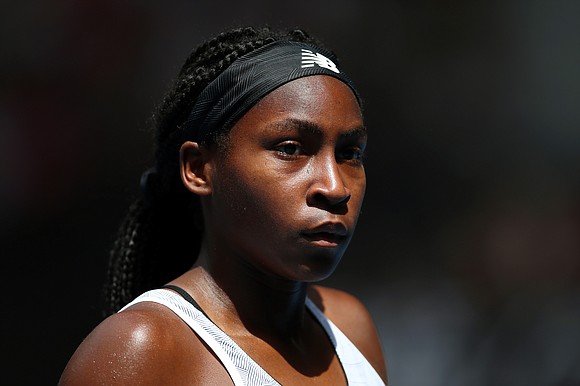 (CNN) -- Coco Gauff lost her opening match at a different looking US Open against former semifinalist Anastasija Sevastova, while two fellow pros who came into contact with a player who tested positive for the coronavirus were allowed to compete on the opening day.

The 16-year-old Gauff fell 6-3, 5-7, 6-4 to the 45th-ranked Latvian on what normally would have been a packed house at New York's Louis Armstrong Stadium, the event's second biggest court.

But amid the coronavirus pandemic, no fans are allowed. Instead, simulated crowd noises tried to fill the void Monday.

Gauff told reporters she didn't think the lack of a crowd factored into the result.

"I think I compete just as hard with fans or not," Gauff said. "I could have played better today. Just going to get back to work and get ready for the French Open."

The French Open, normally the second major on the tennis calendar, has been postponed until September. Wimbledon was canceled earlier this year.

Gauff rose to stardom at Wimbledon last year as a first-time qualifier when she upset Venus Williams, before losing to eventual champion Simona Halep.

She also lost to the eventual champion at the Australian Open in January, Sofia Kenin, while exiting to two-time grand slam winner Naomi Osaka in New York a year ago.

Indeed, it has taken some of tennis' finest to get the better of her. Sevastova fits the description, especially since she has reached the quarterfinals or better at the US Open in three of her past four visits and upset Serena Williams prior to the pandemic.

"I think it's tough for everybody coming here," Sevastova said. "But, yeah, this first hurdle, I won a match again. I think it's going to give me a bit of confidence. I just thought, like, I will fight till the end of this match, we will see how it goes. Coco, she's a great player. I mean, she's 16 years old and she's playing like that. I wish I would play like that at 16."

Gauff's all-around game and intelligence have won her plaudits, along with -- like Osaka -- taking a stand in the aftermath of Black people killed at the hands of police in the US.

The former junior standout spoke at a protest rally in her home city of Delray Beach, Florida, in June following the death of George Floyd and said following the shooting of Jacob Blake in Wisconsin this month that she would continue to use tennis to "build my voice and make it louder so I can reach more people and create change."

"This summer I learned a lot about myself," Gauff said. "I learned that I can overcome a lot of things on and off the court. I still hope I can be that way and use my platform in that way."

Gauff and Osaka could have met again at Flushing Meadows in the third round. On Monday, the big-hitting Japanese baseliner faced compatriot Misaki Doi in the night session.

Ahead of her match, Osaka entered Arthur Ashe Stadium wearing a mask that said "Breonna Taylor" on it. After defeating Doi, 6-2, 5-7, 6-2, Osaka was asked about the mask.

"I have seven," Osaka told ESPN on court. "It's quite sad that seven masks isn't enough for the amount of names, so hopefully I'll get to the finals and you can see all of them."

Osaka -- who pulled out before Saturday's final at the Western & Southern Open because of a left hamstring injury -- will face Italy's Camila Giorgi in the second round.

"I just have to see what happens tomorrow and how I feel," Osaka said.

The Western & Southern Open is usually held just outside of Cincinnati, Ohio, but was moved to the US Open grounds to strengthen the bubble, a concept similarly used in the NBA, NHL and soccer's Champions League and MLS.

The US Open revealed Sunday, however, that an unnamed player had tested positive for Covid-19.

US Open spokesman Chris Widmaier told CNN in an email that the player couldn't be named due to health laws, but he was identified as the outgoing Frenchman, Benoit Paire, by French sports daily L'Equipe. He has since been widely identified in other news outlets and on social media. CNN has reached out to a representative for Paire.

Paire's name was subsequently removed from the official draw and replaced by an alternate from the doubles field, Marcel Granollers.

Paire was named by his fellow Frenchman Adrian Mannarino as testing positive and Paire took to Instagram on Monday evening New York time to say he was "well for the moment" and did not have any symptoms.

"I hesitate to say what is really happening in the fake bubble," he added.

Mannarino and France's Kristina Mladenovic -- who both had been in contact with Paire -- contested their first-round matches Monday.

Asked why the French pair were cleared to play despite the CDC and New York State Department of Health stating that those coming into contact with infected people should quarantine, Widmaier said "enhanced protocols were in place."

Widmaier confirmed that French doubles specialist Edouard Roger-Vasselin was one of those in the enhanced protocol plan after he was named by L'Equipe as also coming into contact with Paire and quoting him.

Mladenovic and Mannarino said they were, too.

She looked drained speaking with reporters in a Zoom call.

"I don't know how we're going to keep going," she said. "I'm not allowed to do any fitness, to any like public bubble thing. I'm completely on my own with my brother/coach. It's literally a bubble in a bubble. I don't know how to be more precise. Literally seeing no one else. Not allowed to any of the facilities that have been put in place for the players. It's mentally very tough."

"I have not been sleeping much," said Mannarino in a Zoom call. "I had no idea if I was going to be withdrawn from the tournament. If I was still going to be in the tournament, then in which conditions? So I've been thinking a lot."

"On Sunday the ATP told us they were discussing with the health department what was going to be the decision concerning all the players who've been in contact with Benoit. So it took a while for them to first make the decision to leave us in the tournament."