Harlem is fighting to save its remaining Black-owned businesses 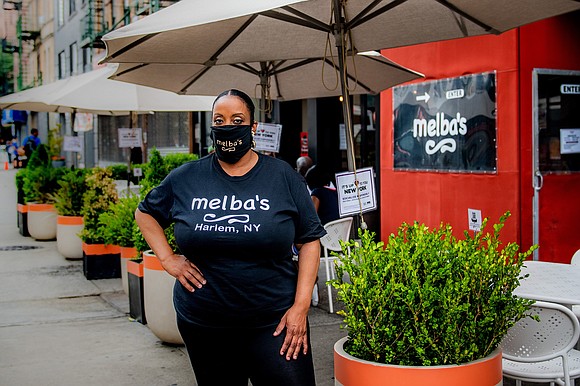 (CNN) -- Black-owned businesses in Harlem, the New York neighborhood synonymous with Black culture and history, were scarce even before the Covid-19 pandemic forced them to shutter indefinitely.

Now the area's business leaders, who have been battling gentrification for years, fear the community may never be the same after the health and economic crises crushed the few Black businesses that remain.

"This could definitely be the Alamo for Harlem," restaurateur and New York Hospitality Alliance President Melba Wilson told CNN Business over the weekend. Wilson, whose restaurant, Melba's, opened in Harlem 16 years ago, has seen the number of Black-owned businesses in the neighborhood shrink over the years.

'If the place goes dark, let me know'

Before the pandemic, Black people made up about 22% of New York City's population, but only 2% of its 230,000 small business owners, according to the city's Department of Small Business Services. The local economic development group Harlem Park to Park said its Black-owned membership dropped from 80% in 2011 to 65% in early 2020.

The group's Executive Director Nikoa Evans, said the worst is still to come.

Coronavirus shutdowns have prevented business owners in Harlem and beyond from earning enough to pay their rent since March. A state moratorium on evictions is set to end on October 31. Evans said she's heard from landlords who've been contacted by large corporations looking for bargains on commercial properties.

"Many of the big corporate chains are now contacting landlords and saying, 'If the place goes dark, let me know,'" Evans told CNN Business on Monday. "It is absolutely a scenario not just in Harlem, but other 'Harlems' around the country."

Evans expects the neighborhood's "legacy brands," like Sylvia's soul food restaurant and the celebrity-owned Red Rooster, to survive the looming corporate bargain sale, but said most small businesses won't be able to pay months of back-rent when the bill comes due.

The city recently unveiled its Black Entrepreneurs NYC program to help address the lack of Black-owned businesses. Big firms like Ernst & Young and Goldman Sachs have signed on to help aspiring Black entrepreneurs with free consulting and access to financing.

But for historically Black neighborhoods like Harlem, it may be too late to save businesses that were already struggling before the devastating punch of coronavirus.

'It's going to rain today, so I'm going to make zero dollars'

White transplants and a surge of immigrants to the neighborhood have fundamentally changed Harlem's demographics over the past two decades. It's been about 20 years since the neighborhood was majority Black, according to data from the NYU Furman Center. Residential and commercial real estate prices have shot up, often edging out Black entrepreneurs who struggle more than most to secure loans.

Wilson said the owners of several of the Black businesses she works with have given up on reopening.

"Many of them have turned in their keys to the landlords," Wilson said. "Everybody's worried about the history of these businesses, this community."

Compounding the problem for restaurant owners: Indoor seating is still banned in the city, even as other parts of the state have been allowed to reopen at limited capacity.

Harlem leaders suggest the restaurant restrictions are having an outsize effect on Black businesses.

Nationally, Black entrepreneurs own a disproportionate amount of independent restaurants, which, in New York, have been limited to pickup, delivery, and outdoor seating during the pandemic. In June, Mayor Bill de Blasio extended the city's "Open Restaurants" program, which grants approved eateries additional sidewalk, street and parking lot space to host outdoor seating.

But Alyah Horsford-Sidberry, owner of the Cove Lounge on Lenox Avenue in Harlem, said not being able to serve indoors has prevented her from paying rent.

"It's going to rain today, so I'm going to make zero dollars," Horsford-Sidberry told CNN Business. "If [Gov. Andrew Cuomo] doesn't allow us to have some kind of indoor seating, that basically puts us out of business."

Alvin Lee Smalls, 78, owner of Lee Lee's Baked Goods, has been selling rugelach pastries in central Harlem since 1988. He recently was chosen to receive a $10,000 grant from Beyoncé's Black-owned small business fund and also secured a federal loan under the Paycheck Protection Program. (Smalls, like many others, was denied a PPP loan during the program's rocky first round of funding.)

But he said the bulk of the profits he usually gets from walk-in customers have been absorbed by delivery apps like Grubhub. As a result, he also has struggled to pay rent. "We certainly are behind," he told CNN Business.

During New York's lockdown, the city signed lucrative contracts with companies outside Harlem to provide food and personal protective equipment, rather than hiring local businesses to do the work within their own community, says Regina Smith, executive director of the Harlem Business Alliance.

A lot of Black entrepreneurs were trying to get contracts to make face masks, Smith said. "We found businesses that were getting contracts and they weren't even vetted. Black businesses are vetted all different kinds of ways."

Jeff Lindor, an adviser for the city's new Black entrepreneurship program, said communities like Harlem won't be the same without current and future Black business owners.

"We need to make sure they stay viable, but also usher in the new generation of Black businesses," he said.