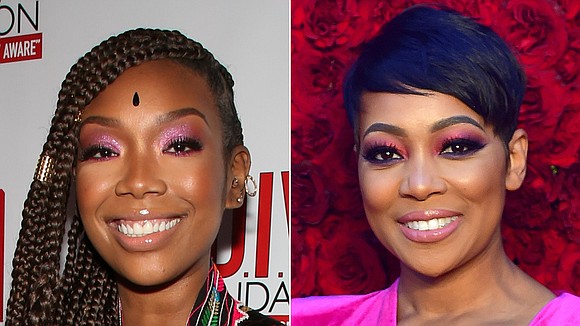 (CNN) -- At least 1.2 million people tuned in for the much anticipated Verzuz battle between R&B legends Brandy and Monica on Instagram Monday.

Not only that, but Sen. Kamala Harris -- rocking a Howard University sweater -- made a surprise cameo appearance encouraging viewers to vote. Former First Lady Michelle Obama was also commenting on the live feed, encouraging people to vote.

"I just wanted to thank you ladies, just you queens, you stars, you icons," Harris said.

Monday's battle featured hits from both Monica and Brandy, including "I Wanna Be Down" and "Don't Take It Personal."

Brandy read several poems, one of which she dedicated to stars who recently passed -- like Kobe and Gianna Bryant, Nipsey Hussle and Chadwick Boseman -- before playing her hit "Missing You."

Monica sang her hit "U Should've Known Better" a cappella and premiered her new song "Trenches" with Lil Baby.

The singers' battle on Instagram was part of an ongoing series by producers Swizz Beatz and Timbaland as a way to entertain fans during quarantine. It has since become a cultural phenomenon on social media.