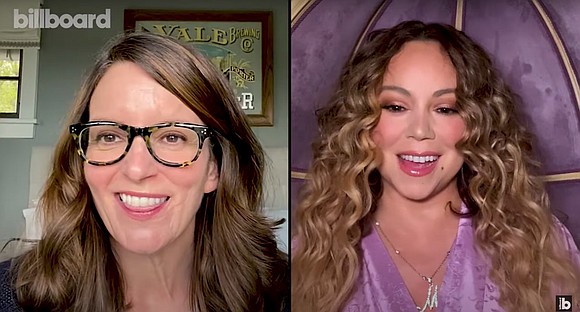 In what is guaranteed to be the best thing you'll see all day, Tina Fey is virtually quizzing Mariah Carey on her love of "Mean Girls." Credit: From Billboard/Youtube

(CNN) -- In what is guaranteed to be the best thing you'll see all day, Tina Fey is virtually quizzing Mariah Carey on her love of "Mean Girls."

The two get into a game of trivia for the latest installment of Billboard's "Quizzed" video series, with Carey, a self-proclaimed "Mean Girls" superfan, quickly ripping through two rounds of trivia with Fey, who wrote and acted in the film.

You'll note that while Fey looked comfortable in a tasteful bedroom, Carey was ensconced in a lavender and gold high-back velvet chair with a fan blowing slightly on her curls. She also wore diamond hoops and a diamond initial M around her neck.

"Could you tell by anything that I'm wearing that I might have seen the movie once or twice? My necklace is an 'M' version of the 'R' that Regina and the 'C' that Cady have," Carey said.

With that level of commitment to the film, Carey easily passed both rounds with perfect scores.

She told Fey she relates to Lindsay Lohan's character, Cady, because she becomes obsessed with Regina.

"I didn't fit in at all being mixed race and moving 13, 14 times, and having a Black father and White mother and everybody was like, 'Who is this weirdo?' So, I was mean because I was just trying to fit in and that was the only way I could fit in," Carey recalled. "I made it my mission to try and aspire to be like a Regina type. I did the best I could. I went to beauty school as well for 500 hours in 11th grade, so that I got some tips."

Carey discussed her own rebellious school years and losing the role of Nancy in the musical "Oliver!"

"I lost the role of Nancy in Oliver...and I just rebelled against it and started smoking cigarettes and hanging out. When I finally got my record deal a few years after that, I quit smoking in one day," she explained.

Carey said the only disappointing part in the movie is when The Plastics used "Jingle Bell Rock" for the talent show routine.

"I'm a little bit disappointed they're not dancing to my song, but "Jingle Bell Rock" is a bit older than "All I Want For Christmas Is You," so that's OK," she said.

Fey told her they are making another "Mean Girls" movie, and that Carey is invited to both license her song and be in the movie if she wants.

"We're gonna make another movie of it, so if you want to license us that song for the movie and also be in the movie, just say nothing now and we'll consider it legally binding," Fey joked. "Just laugh and it'll be legally binding."