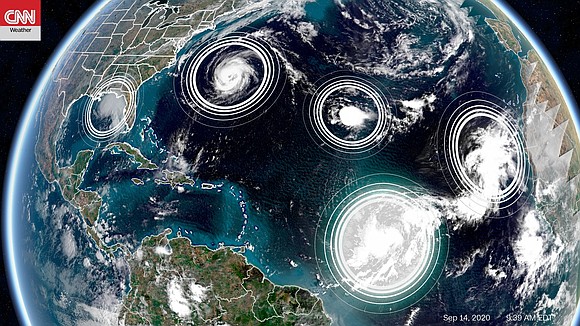 There are 5 tropical cyclones in the Atlantic Ocean at the same time. It's only the second time in history this has happened./Credit: CNN Weather

(CNN) -- It's peak hurricane season, and that's clear when you look at the Atlantic Ocean, which has five active tropical cyclones at the same time for only the second time in history.

The only other time there were five active tropical cyclones -- hurricane, tropical storm and/or tropical depression -- in the Atlantic was in 1971.

Hurricane Paulette made landfall early Monday morning in Bermuda. While Paulette is currently moving away from Bermuda, hurricane conditions are still impacting the island. Strong winds, storm surge and very heavy rainfall will likely continue all the way through the afternoon.

"Swells produced by Paulette are affecting portions of Leeward Islands, the Greater Antilles, the Bahamas, and the United States," the National Hurricane Center (NHC) says. "These swells could cause life-threatening surf and rip current conditions."

Paulette is also expected to continue to strengthen as it tracks into the open Atlantic. The hurricane could gain major hurricane status, with wind speeds of at least 111 mph, on Wednesday. If this does occur it would only be the second hurricane to achieve this distinction so far this season. The Atlantic Hurricane Season typically averages three major hurricanes in total.

Tropical Depression Rene, which had once been a tropical storm this past weekend, will continue to weaken as it tracks through the central Atlantic Ocean. This storm is not expected to impact any land and is also forecast to dissipate within the next two days.

Hurricane Sally is currently heading northwest through the Gulf of Mexico. Mandatory evacuations are already underway for low-lying areas along the Gulf Coast.

As of right now, Sally is forecast to make landfall either Tuesday or Wednesday somewhere near the Louisiana-Mississippi state line. The average forecast track error from the NHC (48 hours out) is about 80 miles, so it is too early to determine exactly where the center of Sally will hit directly. The NHC cautions that people along the coast should not focus on the specific details of the track, but rather the overall impact of the storm.

The big takeaway from this storm is the dangerous amount of water. The NHC is calling for "life-threatening storms surge and flash flooding." The highest storm surge is expected to be just to the east of where Sally makes landfall. Right now the NHC is forecasting 7 to 11 feet of storm surge from the mouth of the Mississippi River east to Ocean Springs, Mississippi, including Lake Borgne. Rising waters from the surge is expected to be felt as far west as Burns Point, Louisiana, and as far east as Saint Andrews Bay, Florida.

Besides storm surge, extreme amounts of rainfall are also forecast for some locations. Widespread rainfall totals along the Gulf Coast from Louisiana to the panhandle of Florida are forecast to be between 6 to 10 inches; however, some cities could see up to 2 feet of rainfall. This amount of rainfall will lead to life-threatening flash flooding including major urban and river flooding as well.

Tropical Storm Teddy is currently in the central Atlantic, well over 1,000 miles east of the Lesser Antilles. Teddy is expected to strengthen to a hurricane over the next few days. If this occurs, Teddy will be the eighth hurricane of this year's Atlantic Hurricane Season, behind Sally. Sally became a hurricane Monday, according to a tweet from the NHC.

By the end of the week Teddy is forecast to become a major hurricane (Category 3 or higher) as it approaches Bermuda. It is too early to tell at this time whether it will directly hit Bermuda, but given the current track it will be something to watch in the coming days.

Tropical Storm Vicky is currently over the eastern Atlantic, just a few hundred miles west of the Cabo Verde Islands. Vicky is the earliest 20th Atlantic named storm on record, breaking the previous record set by Tammy on October 5, 2005.

Vicky is expected to encounter unfavorable conditions in the next couple of days, which will limit its growth and intensification by Tuesday.

"The cyclone is expected to degenerate into a remnant low by Tuesday night, and then dissipate over water on Friday, if not sooner," the NHC said in their forecast discussion.