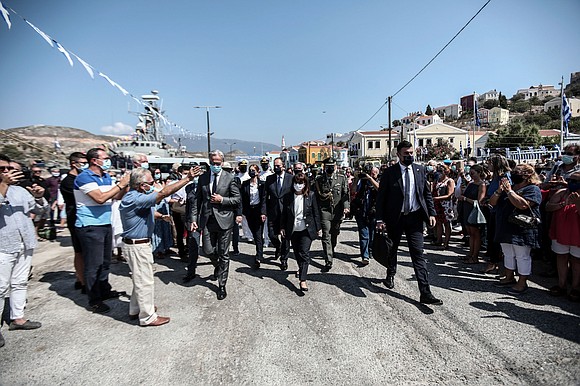 (CNN) -- For weeks, Greece and Turkey have been facing off in the eastern Mediterranean Sea, raising fears that a dispute between two NATO allies could turn into a full-blown regional crisis.

The problem, in a nutshell, is that Turkey claims rights to gas and oil exploration in an area that conflicts with Greece's own claims. Rather than resolving the disagreement through dialogue, Turkey sent its navy and research ships into disputed waters in August, and both countries held rival military exercises in the area in the ensuing days.

Greece's first female president, Katerina Sakellaropoulou, confidently strode into this highly charged environment on Sunday, taking a high-powered military helicopter to Kastellorizo, a tiny Greek island in the eastern Mediterranean, on the 77th anniversary of its nationhood.

The 6-kilometer long spit of harsh rock and scrub, one of Greece's easternmost islands, owes millennia of habitation to geographic good fortune. With its back to the Aegean and its mouth towards Turkey's looming landmass, Kastellorizo's bay turns ocean swells to mill pond tranquility, making it a prized harbor for many centuries of traders plying goods between Asia Minor and Europe.

Today, Kastellorizo is at the center of the dispute over energy exploration in the eastern Mediterranean. Turkey says Greece is unfairly staking its claim to the area based on tiny islands like this one near its coast, cheating Ankara out of ocean floor to explore. Israel and Egypt have already found rich gas reserves under the Mediterranean, and there is plenty of reason to believe there is more to be discovered.

On Sunday, President Sakellaropoulou told the island's residents that "the illegal actions of Turkey have caused tensions never seen before in the Aegean and the Eastern Mediterranean. Tensions aimed not only at Greece, but also the EU and NATO, threatening peace and stability in the region." She added that Greece was "open to dialogue" and that "immediate de-escalation on Turkey's part is a necessary prerequisite for political discussion."

Only hours before she arrived, Greece's Prime Minister Kyriakos Mitsotakis announced he was beefing up the military, splashing out on 18 state-of-the-art French fighter jets, initiating a search for four new frigates for the navy, and adding 15,000 more troops to the army.

When asked why these moves were being made now, Sakellaropoulou told CNN: "Not only to send a message, but if you want to have peace, you must always be better prepared for war -- some ancient Greek has said that, we have to be prepared for everything."

The president's answer appeared to catch her entourage by surprise, but this is the harsh reality of the harsh place these two neighbors have reached. Neither side actually wants war, but neither are able to step away.

The president's visit to Kastellorizo was criticized by Turkey's defense minister on Sunday. "As if there was no other island to go to for celebrations, they go there. Of course this bothers us," Hulusi Akar told state-run Anadolu news agency, though he added that Turkey was also in favor of "dialogue" and "political solutions."

Greece says it will go into talks if Turkey stands its warships down, but for now its unclear if the Turks plan to comply for longer than a few days. A Turkish research vessel which had been escorted into disputed waters by Turkish military ships has now headed back to port in Turkey, a development described as a "positive step" by the Greek government on Sunday.

When Greece and Turkey talk darkly to each other, it's unwise to turn your back to them. Rain often follows when their disputes cloud the horizon. It's barely two generations since Turkey dropped paratroopers onto Greece's neighbor Cyprus, dividing the island in two. Hundreds of thousands of refugees fled to Europe, a peace deal has yet to be signed, and the Turkish-controlled north still awaits international recognition.

Only last week, Mitsotakis wrote an article published in several leading European newspapers about his great uncle's deal-making with Turkey's founder Kemal Ataturk in 1930. His point was that Greece and Turkey have a history of falling out and making up, and that there have been more good days than bad.

But today the stakes are higher. The eastern Mediterranean has proven riches beneath the ocean floor as proxy wars erupt on its shores. Russia has vested interests in Syria and Libya, and Vladimir Putin is tightening his grip on the sea he views as vital to Russia's naval interests.

Turkish President Recep Tayyip Erdogan has tied up a maritime deal with Libya that cuts across Russia and the UAE's interests as well as disrupting a potential eastern Mediterranean gas pipeline to Europe.

Israel has gas to export, Europe wants to diversify gas imports away from Russia, and French President Emmanuel Macron, who opposes Turkey in Libya, has taken a stand behind Greece. The United States is sympathetic to Greece's difficulties too.

These layers of multinational complexity risk triggering a chain reaction -- and like the hydrocarbons Turkey and Greece want to extract, a mistake could be explosive.