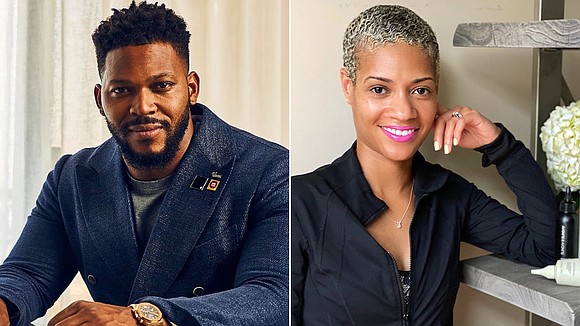 (CNN) -- Infinite Looks, Inc., founder Keenan Beasley wants to help Black women who love working out hit the gym without worrying about "sweating out their edges."

The 36-year-old entrepreneur's new haircare line, Sunday II Sunday, is solving one of the biggest problems for Black women with both relaxed and textured hairstyles who need to keep them clean without drying out their hair and scalp during the week.

It's a constant haircare conundrum for millions of women of color whose natural hair typically demands less shampooing than the silkier hair texture of most White and southeast Asian women to whom the US haircare industry tends to cater.

Sunday II Sunday officially launched on May 31 and already has secured a pair of major investments from Johnson & Johnson Innovation and Ignite Venture Studio. The involved parties won't say exactly how much they've put in, but Beasley and J&J have confirmed both investments are in the 'seven figure" range.

Beasley thanks it's just the beginning — and for good reason. In 2018 alone, Black American consumers spent $473 million on Black haircare products, an estimated $2.5 billion sector that Beasley said is still maturing.

"The sheer buying power of the textured-hair woman is substantial because her hair-demand needs are far greater," he told CNN Business. "This market is not very well defined, which is indicative of the fact a lot of larger corporations haven't gotten behind it."

A decade ago, it was more common for Black women to use perms to chemically alter their natural hair to make it look more Caucasian, a conformative cultural norm born out of slavery. But the Black Lives Matter movement has helped motivate many African Americans to reject Western beauty standards in favor of their own — reminiscent of the Afro hairstyle era from the Black Power Movement of the 1960s and '70s.

Today millions of Black women have chosen to "go natural," increasing their demand for haircare products that aid their natural hair texture. The shifting norms have created business opportunities for shrewd investors.

"Our goal is to accelerate solutions that have the potential to make a transformational impact on the health and wellbeing of people around the world," Wu told CNN Business. "Our investment in Infinite Looks aligns with our overall strategy to fuel innovative healthcare products and solutions around the world."

Sunday II Sunday is the brainchild of Beasley and Jennifer Davis Alexander, a cosmetic science PhD who heads the company's research & development division. The duo met several years ago when they both worked for Procter & Gamble in Cincinnati.

Beasley said he presented the idea for Sunday II Sunday to investors in 2019, more than a year before the George Floyd tragedy fueled a surge in interest in Black-owned businesses.

"The consumer feedback has been fantastic," he said of recent interactions with customers.

The key for Sunday II Sunday is focusing on a woman's scalp and its depletion of sebum, a natural oil the human body produces to moisturize the skin. Every person's hair is different, but Davis Alexander said women with naturally textured hair tend to have dryer scalps than women with silkier hair due to the differing shape of their follicles and the way sebum moves through them.

As a result, women with textured hair tend to wash their hair less often to avoid drying it out, but working out during the week complicates matters.

"When you sweat excessively from working out, the sebum is diluted," Davis Alexander told CNN Business. "There needs to be something to remove that sweat from the scalp to make sure the sebum can do its job. Our products are giving women a solution to say, 'You can work out and still have a moisturized hair and scalp."

Sunday II Sunday's line of products are designed to be applied to the scalp between shampooing sessions during the week, hence the product line's name.

"There's a fear that when Black women sweat, the style starts to become frizzy and look a little more wild," Beasley said. "Our goal is to help women live their lives without compromises. If she wants to get in the pool, work out, we want to show her what she can do with her hair and what she can with that activity."