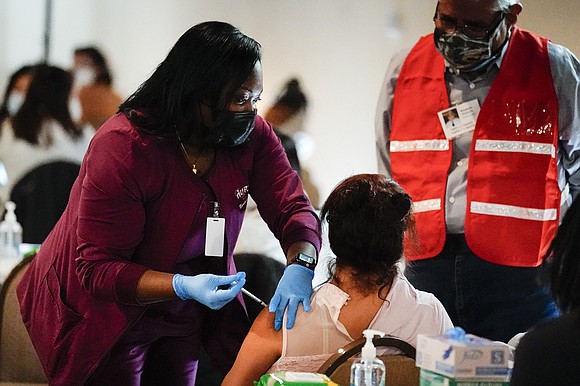 All 50 states have announced when they plan to open up coronavirus vaccinations to everyone eligible. In this March 17, 2021, file photo, health worker administers a dose of a Pfizer COVID-19 vaccine during a vaccination clinic at the Grand Yesha Ballroom in Philadelphia. Mandatory Credit: Matt Rourke/AP

(CNN) -- As informal as today's parents are compared with previous generations, there remains a handful of uncomfortable subjects. Alcohol and drug use is one of them.

It's certainly easier, and often more appealing, to turn a blind eye for some parents. Everyone is drinking beer and smoking pot. It's all part of growing up, especially for parents who grew up with access to lots of different substances. Right?

Not necessarily. In her new book "The Addiction Inoculation: Raising Healthy Kids in a Culture of Dependence," Jessica Lahey looks at the risks of substance abuse in kids, and what parents can do to prevent it.

CNN spoke to Lahey about why the adolescent brain is especially vulnerable to alcohol and drugs and how parents, caregivers and other adults with kids in their lives can all support fast-growing children to make better decisions when it comes to alcohol and drug use. She also shared how her own sobriety inspired the book.

This conversation has been edited and condensed for clarity.

CNN: Addiction is personal for you. How did that come into play while writing this book on kids and substance abuse?

Jessica Lahey: It was scary because it isn't just me who had a substance abuse disorder; it's also a lot of my extended family. But I entirely believe that the more I talk about what I have been through, the easier it is for other people to talk about their experiences. The more I talk about it, the more I can erase the stigma of what this is.

It wasn't until I got into recovery that I realized just about anyone you meet can be an alcoholic. There are a lot of perfectionists who deal with their anxiety with alcohol.

CNN: How does the adolescent brain develop in a way that makes teens more vulnerable to addiction?

Lahey: The adolescent brain is in this process of developing and becoming, and it is not finished cooking until young people are in their early or mid-20s. Adolescents aren't wired for addiction, but they are wired to take risks. Their baseline levels of dopamine (a type of neurotransmitter associated with pleasure) are lower than they are for children or for grown-ups. Drugs and alcohol became a route to novelty and risk — to feel something.

CNN: It's also more damaging for them. Why?

Lahey: Mainly because so much development is going on, and once the damage happens you can't go back and fix things. There are receptors in the brain that are critical for learning, memory and emotions that are being perfected and honed during the adolescent period.

CNN: You write about how addiction prevention begins early. What are some of your suggestions for little kids?

Lahey: Just like with the sex, there isn't just one drug or alcohol talk. With little kids, the best prevention is social and emotional learning in schools.

Around elementary school, watch what you say to your kids. "I've had such a hard day, I need a drink to unwind." We use this language around kids, and boy, do they hear us, and do as we do and not as we say. When they see us using alcohol and drugs to deal with sadness or cope with emotions, they get the message that that is what alcohol and drugs are for.

CNN: This seems particularly important during the pandemic, when many parents and kids are struggling with stress, anxiety, depression or all three.

Lahey: Surveys have shown that adults have been drinking a lot more alcohol during this pandemic, and our kids see the way we use drugs, alcohol -- and food, for that matter. Again, I'm not saying we can't drink, use drugs or eat cookies, but I am saying when we show our kids that those things are a valid way to mask or numb out our feelings, they are a lot more likely to do the same. As a side note, I'm saying this as a woman who is coming out of this pandemic 10 pounds heavier than I went in.

CNN: How do you talk to teens?

Lahey: Turn it into a conversation about the way they are being marketed to. Adolescents hate being manipulated. "Do you think that having that beer will make you gorgeous and slim?"

Overall, the thing teenagers want from us is honesty, real information and evidence. When we use scare tactics they just don't believe us. We need to tell them about how their brains are developing, their risk factor, and give them refusal skills.

The best we can do is give them as much information as possible.

CNN: What does this look like in your house?

Lahey: At first, I had fully bought into the idea that in order to raise moderate drinkers, I should be more European and let my kids have sips in the home.

It turns out this doesn't work. Not only because, despite what we think, the European Union is, according to the World Health Organization, "the heaviest drinking region in the world." But also because parents of children who have a clear and consistent message of abstinence until alcohol use is legal are much less likely to develop a substance abuse disorder.

If we can just get them to age 18, it does a lot to protect their brains and prevent them from a lifelong risk of a substance abuse disorder.

In our home, we have a clear message that you can't drink until age 21.

CNN: What about the college years?

Lahey: At first I didn't know if I would do a college chapter. We think of drinking as an inevitable part of the college experience, and I thought I would just be shouting into the wind.

But I learned that the number of kids who drink during college is lower than I thought. It's a very small group of kids responsible for the majority of drinking on campus. Schools are increasingly recognizing the importance of sober alternatives.

CNN: If you could wave a magic wand and change one thing right now about college and alcohol, what would it be?

Lahey: I would love it if colleges were more supportive of kids who don't drink or choose to drink occasionally. I am not anti-alcohol or anti-drugs. I am just pro-protecting adolescent brains and keeping kids safe. If our expectations change, they will rise to those expectations.