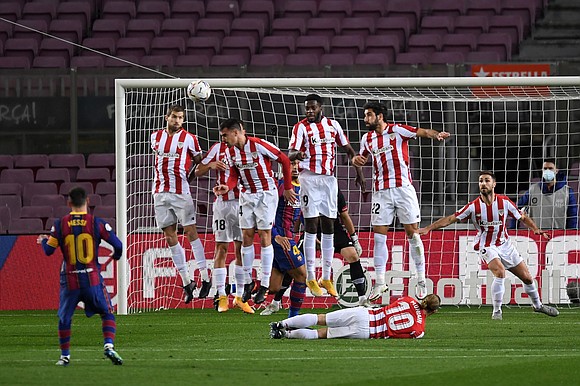 (CNN) -- Barcelona says it "categorically denies" responsibility for the publication of Lionel Messi's $672 million contract, which was reported by Spanish newspaper El Mundo.

The contract would make Messi the highest paid athlete in sports history.

The club also said it will take legal action against the newspaper "for any damage that may be caused as a result of this publication."

According to the report, Messi's contract, which was signed in November 2017 and runs until June 30 this year, could have seen the star forward earn $167 million a season including bonuses. The written agreement also reportedly includes an image rights contract.

El Mundo also reports that Messi received a "renewal fee" of $139 million for accepting the contract and a $94 million loyalty bonus.

"The club regrets [the contract's] publication given that it is a private document governed by the principle of confidentiality between the parties," said a statement from Barcelona.

"FC Barcelona categorically denies any responsibility for the publication of this document and will take appropriate legal action against the newspaper El Mundo, for any damage that may be caused as a result of this publication.

"FC Barcelona expresses its absolute support for Lionel Messi, especially in the face of any attempt to discredit his image, and to damage his relationship with the entity where he has worked to become the best player in the world and in football history."

CNN has contacted El Mundo in relation to Barcelona's statement but is yet to receive a response.

In its publishing of the story, El Mundo said the analysis of the document was a laborious process carried out in recent days.

"The world exclusive that El Mundo has published this Sunday is the result of many months of work, accelerated in recent days, when finally the most sought-after document reached the newsroom," reads an excerpt.

Messi has yet to publicly respond to El Mundo's story and didn't immediately respond to CNN's request for comment.

Meanwhile, Messi scored his 650th goal for Barcelona on Sunday in a 2-1 win against Athletic Bilbao.

There has been much uncertainty about Messi's future at Barcelona after he admitted last year that he had wanted to leave the club.

He has also taken aim at the club's hierarchy, notably after former teammate Luis Suarez signed for Atletico Madrid in September.