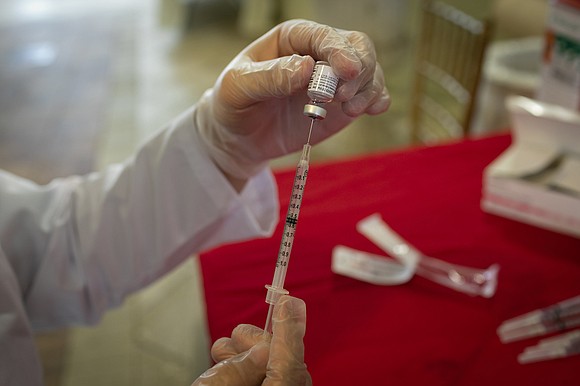 A healthcare worker prepares to administer a dose of the Pfizer-BioNTech Covid-19 vaccine to the residents at The Palace, an independent living community for seniors, at Coral Gables in Miami, Florida, United States on January 12, 2021. Credit: Eva Marie Uzcategui Trinkl/Anadolu Agency/Getty Images

(CNN) -- Pfizer expects to earn approximately $15 billion in revenue from its Covid-19 vaccine this year, the company said Tuesday.

Its fourth-quarter earnings report was the first since Pfizer's Covid-19 vacine received emergency-use authorization from the US Food and Drug Administration in December — the first vaccine to receive such approval. Since then, the vaccine, developed in partnership with German firm BioNTech, has begun to roll out across the country, as well as elsewhere around the world.

The vaccine contributed $154 million in sales during the fourth quarter. Pfizer's projection for revenue from the vaccine in 2021 primarily includes doses expected to be delivered under existing contracts and may be updated as new contracts are executed, the company said, indicating that revenues could be even greater. The company added that patients will likely need to receive regular boosts of the vaccine to "maintain immune response and to counter emergent variant strains," which would mean ongoing revenue from the product beyond this year.

The company said it can potentially make a total of 2 billion doses worldwide by the end of 2021, based on expansion at its current facilities and "contingent upon adding more suppliers and contract manufacturers," though it's unsure if it will actually sell all those doses. French pharmaceutical company Sanofi recently signed on to fill and pack more than 100 million vials of Pfizer's vaccine this year in an effort to meet huge demand for the shots, as much of the world continues to be pummeled by the pandemic.

The company raised its overall earnings guidance for 2021 to between $3.10 and $3.20 per share, thanks in part to the expected revenue contributions of the vaccine.

The projection was a bright spot in an otherwise mixed earnings report. Pfizer posted quarterly revenue of nearly $11.7 billion, up 12% from the same period in the prior year and slightly ahead of Wall Street analysts' projections. Earnings per share hit $0.42, but fell short of Wall Street's expectations. The company's stock fell nearly 3% in early trading Tuesday.

Pfizer is coming out of a major corporate restructuring, which involved spinning off several parts of its business to focus on developing and distributing more innovative medicines. Although it's playing a major role in fighting coronavirus, Pfizer's broader business was challenged by the pandemic — fewer people leaving home to see their doctors meant fewer new prescriptions for some of Pfizer's key products during much of 2020. The company said it expects a "continued recovery" in broader healthcare activity in 2021 as more people become vaccinated.

Pfizer posted full year revenue of $41.9 billion, up 2% from the prior year.

"2020 has been a transformational year, not only for Pfizer, but also in the life of every patient in every community that we serve," Pfizer CEO Albert Bourla said in a statement. "We saw the culmination of Pfizer's decade-long conversion into a pure-play, science and innovation-focused company ... Our record-breaking success at developing a vaccine against Covid-19, along with our partner BioNTech, is just one example of what we believe this new Pfizer is capable of achieving."

Bourla expressed optimism about the company's pipeline of products beyond the Covid-19 vaccine, which include cancer drugs and a pneumonia vaccine, on a call with analysts Tuesday morning. The company reaffirmed its projected revenue compound annual growth rate of at least 6% through 2025, excluding any potential contributions from the vaccine.

"We believe the industry has generated a great deal of good will with Congress and public opinion with our Covid-19 treatment and vaccinations, and we hope we can build on this goodwill by working together on a solution, including making a contribution as an industry through legislation or executive action that results in lower out of pocket costs to patients," Bourla said. "The status quo simply won't cut it and we look forward to working with the Biden administration and members of Congress from both sides of the aisle to help ensure our breakthroughs are accessible to all."