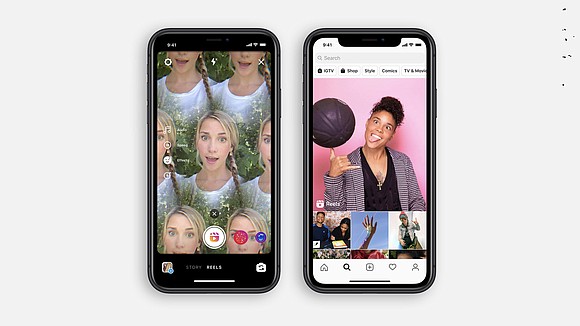 Instagram's short-form video feature has been flooded with popular TikToks -- and the Facebook-owned company seems to have noticed. Credit: Instagram

(CNN) -- Instagram's short-form video feature has been flooded with popular TikToks -- and the Facebook-owned company seems to have noticed.

On Tuesday, Instagram said it's making changes to the videos it recommends in the dedicated Reels tab on the home screen, including not serving up videos with watermarks or logos from other platforms as often.

"We heard in research that people have a less satisfying experience when they see content that is recycled from other apps or is blurry and low resolution. So, we're making this content less discoverable in places like the Reels tab," Devi Narasimhan, a Facebook spokesperson told CNN Business.

Instagram doesn't mention TikTok by name, but CNN Business has previously reported that it's common to see one TikTok video after another while scrolling through Reels. Some influencers have also acknowledged that they repost their TikToks on Reels.

"It really does cheapen the experience when people just promote their TikToks with the logo in Reels," said Ricky Ray Butler, CEO of influencer marketing firm BEN. "Instagram has become a TikTok farm."

While those types of videos won't be recommended as often in the Reels tab, they'll still be shown to the user's followers via their profile or in the feed.

Instagram launched Reels in the United States in August, but the TikTok clone has struggled to gain traction. Still, Instagram has doubled down on the feature, giving Reels its own button on the home screen and adding more tools such as additional editing capabilities.

Social media experts have pointed to several reasons for why Reels hasn't taken off, including TikTok's cultural impact, its powerful content recommendation algorithm and the fact that the app is far more focused than Instagram's, which has a growing list of competing video offerings.

Snapchat, which launched its own spin on TikTok last year called "Spotlight," does not allow users to upload videos with watermarks from different platforms.