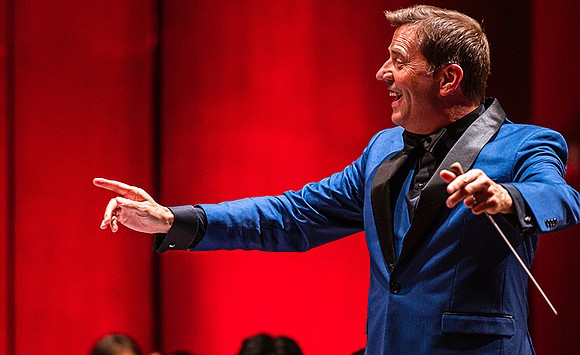 The month of March opens with two exhilarating Classical Series concerts. French conductor Fabien Gabel returns to Houston for the second time this season to lead the orchestra in the program Beethoven’s Pastoral Plus Bronfman, part of the Shell Favorite Masters series, March 5–7. The program begins with Stella Sung’s Fanfare, a small ensemble piece highlighting members of the Symphony’s brass section. In celebration of Beethoven’s 250th birthday, the program continues with two works by Beethoven: his Piano Concerto No. 3 and Symphony No. 6, Pastoral. Known for his staggering virtuosity, legendary pianist Yefim Bronfman joins Gabel and the orchestra in Beethoven’s sweeping Piano Concerto No. 3. To conclude, Gabel leads the orchestra in the famous composer’s Symphony No. 6, Pastoral, inspired by his love of nature. Beethoven’s Pastoral Symphony takes listeners on an audible exploration of nature and a journey to one of music history’s most satisfying finales. This performance is livestreamed on Saturday, March 6, at 8 p.m. CST.

“Having been a member of a jazz band for three years in college, I have always related to this piece quite closely,” shared Nuccio. “My first performance of the composition was in 2013, as only the 2nd person to have performed it with the New York Philharmonic since 1948. I look forward to performing it here.”

Returning guest conductor Juraj Valčuha, Music Director of the Teatro San Carlo in Naples, opens the program with Sinfonietta No. 1 by innovative American composer Coleridge-Taylor Perkinson, whose accomplishments span the worlds of jazz, dance, pop, film, television, and classical music. Valčuha closes out the evening with Beethoven’s upbeat Symphony No. 2. The lively masterpiece combines musical jokes and jovial energy, even as Beethoven struggled at the time with his devastating hearing loss. Part of the Rand Group Great Performers series, this performance is livestreamed on Saturday, March 13, at 8 p.m. CST.

Led by Principal POPS Conductor Steven Reineke, the woodwind, brass, and percussion sections of the Houston Symphony perform some of the most outstanding new wind ensemble compositions in the Bank of America POPS program, Musical Storytellers: Winds of the Houston Symphony, March 19–21. Specially curated by Reineke for the Houston Symphony, the unique wind ensemble program invites listeners to experience the works of James Stephenson’s spirited and energetic American Fanfare; a movement from an original composition by Johan de Meij based on The Lord of the Rings; one movement, entitled Shout! from a two-movement tribute of a Sunday worship service at an African-American church by Omar Thomas; the poetic Hymn to New England by John Williams; the folksong-like Sheltering Sky by contemporary composer John Mackey; the tone poem Mountain of Dragons by Reineke himself, who is a frequent composer of wind symphonic pieces, and many more. This performance is livestreamed on Saturday, March 20, at 8 p.m. CST.

The Saturday performance of Musical Storytellers: Winds of the Houston Symphony is part of the Symphony’s annual Salute to Educators celebration, which recognizes music teachers for fostering music education in Houston-area schools. This year’s Salute honors all teachers in the state of Texas for their hard work and perseverance during a challenging school year. Salute to Educators is sponsored by Spec’s Wines, Spirits & Finer Foods/Spec’s Charitable Foundation, the Houston Symphony’s Principal Corporate Guarantor.

In-person and livestream tickets are now available for these performances at houstonsymphony.org/2021season. Each livestream performance is available via a private link to ticket holders for $20, and livestream subscribers who purchase a package of tickets receive an additional 25% discount. For patrons attending in person, concerts will continue to have a one-hour run time with no intermission, and food and beverage service will be suspended to eliminate crowding. For a comprehensive list of safety measures, visit houstonsymphony.org/safety. For tickets and information, please call 713.224.7575 or visit houstonsymphony.org. All programs and artists are subject to change.

The Classical Series, sponsored by the Robert Cizik Family, is endowed by the Wortham Foundation, Inc., in memory of Gus S. and Lyndall F. Wortham. Livestream of Houston Symphony concerts is made possible by Barbara J. Burger.

Bach: Prelude for Violin Partita No. 3 in E major

During the 2020–21 Season, the Houston Symphony celebrates its seventh season with Music Director Andrés Orozco-Estrada and continues its second century as one of America’s leading orchestras with a full complement of concert, community, education, touring, and recording activities. The Houston Symphony, one of the oldest performing arts organizations in Texas, held its inaugural performance at The Majestic Theater in downtown on Houston June 21, 1913. Today, with an annual operating budget of $25.8 million, the full-time ensemble of 88 professional musicians presents nearly 170 concerts annually, making it the largest performing arts organization in Houston. Additionally, musicians of the orchestra and the Symphony’s two Community-Embedded Musicians offer over 1,000 community-based performances each year at various schools, community centers, hospitals, and churches reaching more than 200,000 people in Greater Houston annually.

The Grammy Award-winning Houston Symphony has recorded under various prestigious labels, including Koch International Classics, Naxos, RCA Red Seal, Telarc, Virgin Classics, and, most recently, Dutch recording label Pentatone. In 2017, the Houston Symphony was awarded an ECHO Klassik award for the live recording of Alban Berg’s Wozzeck under the direction of former Music Director Hans Graf. The orchestra earned its first Grammy nomination and Grammy Award at the 60th annual ceremony for the same recording in the Best Opera Recording category.