A spike in prices could change everything for Wall Street 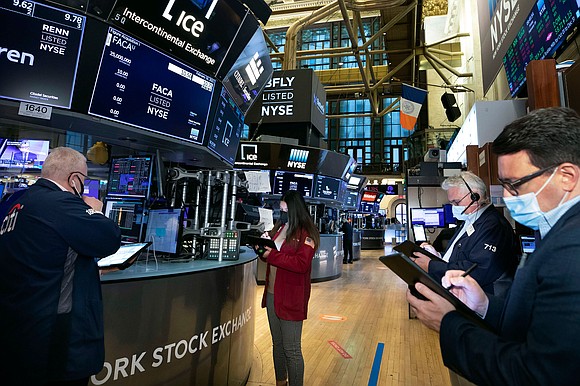 (CNN) -- Wall Street is increasingly concerned that a wave of spending when the economy reopens could cause prices to spike, spoiling the financial market party that's been raging since last March.

Investors are worried that higher inflation would pressure central banks like the Federal Reserve to hike interest rates or taper bond purchases sooner than expected. After a long period of easy access to money, that could trigger a market tantrum.

"The economy is more leveraged than in previous eras, so a bit of Fed tightening eventually can do more damage," John Normand, JPMorgan's head of cross-asset fundamental strategy, said in a recent note to clients.

Monitoring prices is a key job of central banks. The Federal Reserve targets long-term inflation of 2%.

Such a goal has proved elusive in recent years. Inflation following the 2008 financial crisis remained extremely muted. But that could change in the post-pandemic era as people sprint to restaurants, movie theaters and vacation hotspots this spring and summer. Another big stimulus package in the United States could add fuel to the fire.

"The surprising jump in January US retail sales may offer a glimpse of things to come," Jean Boivin, head of the BlackRock Investment Institute, told clients Monday.

Such anxiety is starting to appear in bond markets, and central bankers are paying attention. A rise in government bond yields can affect borrowing rates, and make it harder for governments to manage large piles of debt.

European Central Bank President Christine Lagarde said Monday that her institution is "closely monitoring" longer-term bond yields, emphasizing that "banks use those yields as a reference when setting the price of their loans to households and firms."

Many on Wall Street think central banks are prepared to look past inflation noise, letting the economy run hotter than they normally would in order to maintain favorable financing conditions that will juice the recovery.

"We expect central banks to lean against any market concerns around rising debt levels and to keep interest rates low for now," Boivin said.

There's a lot is riding on that assumption. The recent run-up in stocks is thanks in part to super-low interest rates, which have boosted interest in riskier assets.

Tuesday trading doesn't look much better, with all three major stock indexes in the red. The S&P 500 was down 0.9% in the early afternoon. If the index -- the broadest measure of Wall Street -- ends the day lower, it would mark its longest losing streak in a year.

"If the narrative on high debt levels, combined with rising inflation, were to change, it could eventually undermine the markets' faith in the low-rate regime — with implications across asset classes," Boivin noted.

Meanwhile, Federal Reserve Chairman Jerome Powell testified before the Senate Banking Committee. Even though the central bank acknowledged that inflation could rise as the economy reopens fully, he reiterated that it was unlikely to spark an immediate need for higher interest rates.

"The economy is a long way from our employment and inflation goals," Powell said in prepared remarks, signaling once again that the central bank isn't ready to raise interest rates in the near term.

The market had little reaction to Powell's testimony.

Uncle Sam is in search for a pot of gold that could ease the pain of trillion-dollar deficits. And some believe Wall Street might have the answer.

For more than a decade, progressives have tried and failed to impose a financial transaction tax. But there is new momentum for such a levy as the national debt skyrockets during the pandemic, and after the GameStop frenzy highlighted concerns about market structure, my CNN Business colleague Matt Egan reports.

The White House told CNN Business that a financial transaction tax on GameStop-like trading deserves additional study and can be part of a greater evaluation of such a tax for revenue and market stability. The leading proposal amounts to a $1 tax on every $1,000 of transactions.

A 0.1% tax on stock, bond and derivative transactions could raise $777 billion for the federal government over a decade, according to a 2018 estimate by the nonpartisan Congressional Budget Office. The top 1% of American households would pay 40% of the total amount of the tax, while the bottom 60% would pay just over 11%, the Urban-Brookings Tax Policy Center has found.

But there is a deep divide over the wisdom of a levy.

Proponents see it as a smart way to simultaneously curb predatory trading while funding ambitious programs aimed at easing America's inequality problem. Critics, meanwhile, paint such a tax as a nightmare. Wall Street, which would take a hit, is already warning such a policy would backfire on Main Street, raising trading costs and depressing market liquidity.

"The odds are still against a financial transaction tax being enacted, but for the first time in a decade this proposal should be considered as a viable policy option rather than just another talking point," said Isaac Boltansky, director of policy research at Compass Point Research & Trading.

Facebook will restore news pages in Australia, capping a bitter dispute between the social media giant and the country's government.

Remember: Australian lawmakers have been pushing legislation that would allow certain media outlets to bargain with tech companies so they could be paid for distribution of the news they produce. Both parties would enter arbitration if they can't reach an agreement.

In protest, Facebook stopped people from finding news on its platform in Australia last week, a decision that produced a global backlash and generated negative headlines for the company.

The latest: On Tuesday, the Australian government said it would amend the code so that arbitration would only be used as a "last resort" following a period of "good faith" mediation. As a result, Facebook said it would restore news in Australia "in the coming days."

"The government has clarified we will retain the ability to decide if news appears on Facebook so that we won't automatically be subject to a forced negotiation," Campbell Brown, Facebook's vice president for global news partnerships, said in a statement.

Big picture: Policymakers around the world have closely watched what's happening in Australia. On Monday, Microsoft joined forces with publishers to call for an Australia-style system in Europe. Canada's government has said it plans to introduce legislation in the coming months.

That means that the agreement reached between Facebook and Canberra could be replicated globally, sparking major changes to how the biggest tech companies run their businesses.