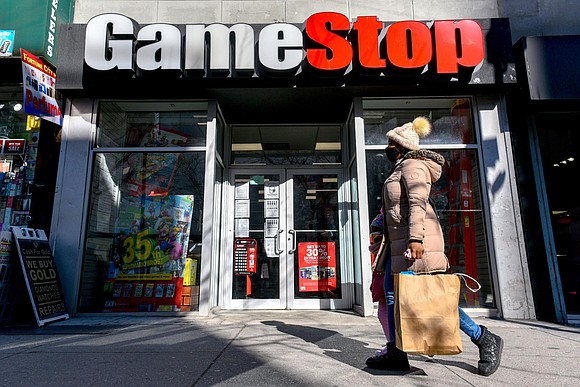 People walk past a GameStop store in Brooklyn, New York on Jan 28. GameStop shares rallied 67% ahead of the opening bell February 25, following another blockbuster day for the stock. Credit: Erik Pendzich/Shutterstock

(CNN) -- GameStop shares rallied as much as 85% in early trading Thursday, following another blockbuster day for the stock. On Wednesday, the gaming retailer's stock closed nearly 104% higher.

Investors gained interest in the stock once again a few days after the company announced its chief financial officer would resign next month to help "accelerate GameStop's transformation," which could fuel investors who believe in the long-term value of the retailer and its ability to shift from relying on physical stores to an e-commerce sales model.

Trading of the stock was halted twice Wednesday and its trading volume was roughly three times higher than the five-day average for the stock, according to data provider Refinitiv.

Having déjà vu yet? The surge comes about a month after a wild GameStop trading frenzy caused its stock to jump around 1,600% in a matter of days, though it quickly fell from its highs around $350 (Shares opened Thursday at around $170).

The late January surge was fueled by individual retail investors, many from the Reddit page WallStreetBets, some of whom believed the GameStop was undervalued and others who wanted to squeeze hedge funds that had shorted the stock.