Getting Back On Track Rockets blowout Orlando with the help of some key role players. 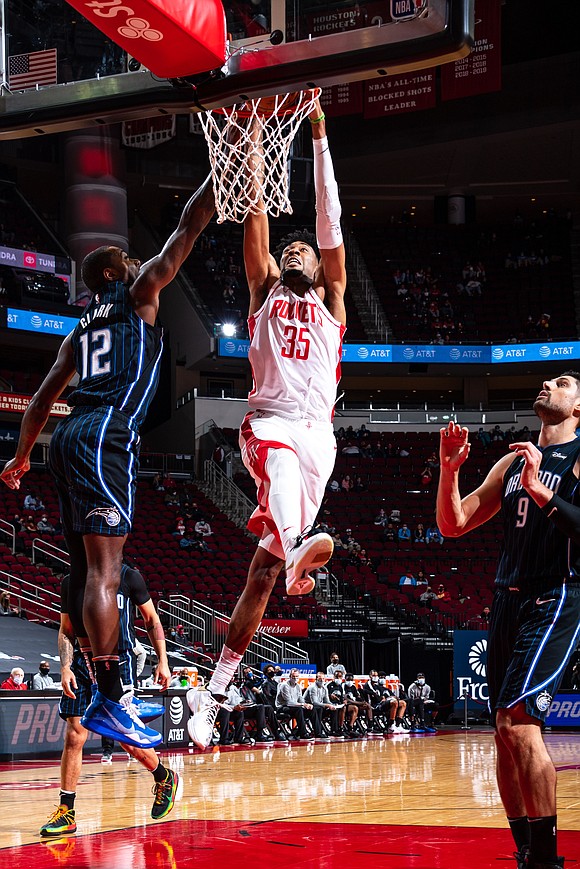 The Houston Rockets (3-4) broke a two-game losing streak on Friday night as they defeated the Orlando Magic (6-3) by a score of 132-90 at the Toyota Center. Houston used a very strong defensive plan against the depleted Magic to hold them to 33 points in the first half that included the Rockets holding Orlando to only two made baskets in the final 6:58 of the first quarter.

“We really played hard and it seems like our concepts are really sinking in more," said Rockets head coach Stephen Silas.

Rockets center Christian Wood returned to starting lineup after missing Wednesday’s game against the Indiana Pacers and immediately made his presence felt with his fifth double-double of the season. Wood finished with 22 points and a career high 15 rebounds as his presence was also felt on the defensive end by clogging up the lane and protecting the rim.

It was a very quiet night for superstar James Harden by the measuring stick used by some that judge him on the offensive end. He scored 15 points and added 13 assists which brings his average to 11.3 and ties him with former backcourt teammate Russell Westbrook who was traded in the offseason to Washington.

Coach Silas didn’t need too much from his former NBA MVP on Friday night as the points came in abundance from role players that can contribute to the team as they move forward this season. Veteran forward P.J. Tucker hit 5 three-pointers from his favorite spot on the floor (corner) giving him 15 points for the game. He also now has over 700 made three-pointers in his career.

Tucker was asked after the game if the opposing team will ever figure out that he is very accurate from the corner.

“I hope they never figure it out,” Tucker said with a smile.

One other player the Magic had trouble figuring out was reserve guard Ben McLemore who had missed the first six games of the season due to COVID-19. He went 5-for-5 from beyond the arc and showed no signs of fatigue in his 16 minutes on the floor. McLemore’s performance from the three-point range added to the season high 22-made by the Rockets.

“It gives us a stone-cold shooter on the perimeter,” said coach Silas when asked how important it was to have McLemore back. “As you saw from our previous games, we needed that.”

Houston will now prepare for a two-game series in Toyota Center against the defending NBA Champions, Los Angeles Lakers who are tied for best record in the NBA at 7-3. The first game will be played on Sunday January 10th and the second game will take place on January 12th.