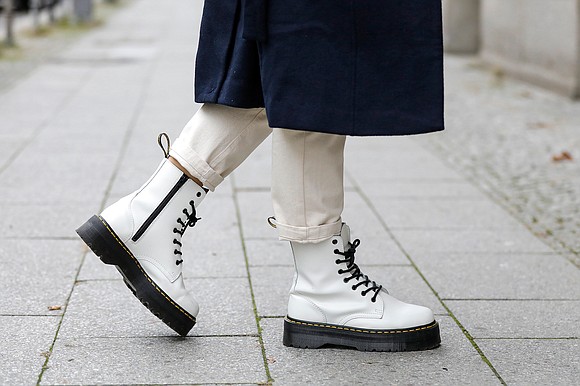 Iconic footwear brand Dr. Martens is considering a listing on the London Stock Exchange amid a bullish outlook for the UK IPO market in 2021. Credit: Streetstyleshooters/Getty Images

(CNN) -- Iconic footwear brand Dr. Martens is considering a listing on the London Stock Exchange amid a bullish outlook for the UK IPO market in 2021.

The company, which sells 11 million pairs of shoes a year in more than 60 countries, said in a filing on Monday that an IPO would entail the sale of at least 25% of its shares by existing owners, including private equity firm Permira. No new shares would be issued.

Dr. Martens joins a growing list of companies that could IPO in London this year. While none have confirmed listings, food delivery company Deliveroo, McLaren Group, Jaguar Land Rover and craft brewer BrewDog could be looking at IPOs, according to stockbroker IG.

"The interest in IPOs has also been boosted by the frenzy surrounding the Airbnb and Doordash IPOs in the US which were hugely oversubscribed," Streeter told CNN Business. Dr. Martens has profited from a shift towards online shopping during the pandemic, but it is also reliant on "fickle fashion tastes," which could change in future, she added.

The British brand launched its signature eight-holed 1460 boot in 1960. According to the company's website, it was initially worn by postmen and factory workers but later picked up by ska-loving young people who championed British working class style.

Pete Townshend of English rock band The Who became the first celebrity to wear them, changing a work-wear boot into a symbol of rebellious youth culture.

Permira bought Dr. Martens in 2014 for €380 million ($462 million) and has invested in its direct-to-consumer channels, including company-owned physical stores and e-commerce.

Despite the majority of its stores being closed for months due to the pandemic, revenue over the six months to September 30 increased 18% to £318 million ($428 million) compared with the same period in 2019, according to the filing.

The company sold 5.5 million pairs of shoes during that period — 700,000 more compared to the prior year — and doubled its revenue from e-commerce.

CEO Kenny Wilson said the brand has "significant global growth potential" in the future. "Our iconic brand appeals to a diverse range of consumers around the world who wear our footwear to express their individual style," he added.