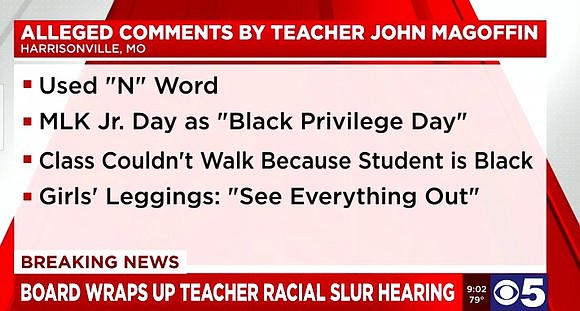 A school teacher is accused of using racial and homophobic slurs in the classroom. Mandatory Credit: KCTV

It’s regarding a teacher accused of using racial and homophobic slurs in the classroom.

The school board ended their special session to decide the fate of high school science teacher John Magoffin. The board’s president Tina Graef has indicated that a decision will not come Tuesday morning.

Magoffin was accused of using inappropriate language in the classroom in a social media post by a district employee who is also a parent of a child at the district. They say Magoffin made hostile comments towards students while he was in class.

According to a statement of charges from the district, those allegations include using the “n” word and referring to Martin Luther King Jr. Day as "black privilege day." He also allegedly told a student that the class could not go on a walk during a mask break because she is black.

In addition, another allegation includes Magoffin telling students he didn’t believe students should be allowed to wear leggings because he could "see everything out."

The parent said they decided to speak out after hearing about the accusations against the Olathe baseball coach accused of making racial slurs towards one of his players.

Overnight, the school board heard from several witnesses from each side. The school’s witnesses outlined evidence of the charges while Magoffin’s attorney refuted them during closing statements.

In the past, his attorney has called the allegations patently false.

It's unknow right now the statements made during the overnight hearing., But KCTV5 News did file a request of statement charges to find out any more information.

If the board does not come to a decision Tuesday morning, they will decide on another meeting time to do so.