Hertz has buyers and a plan to emerge from bankruptcy 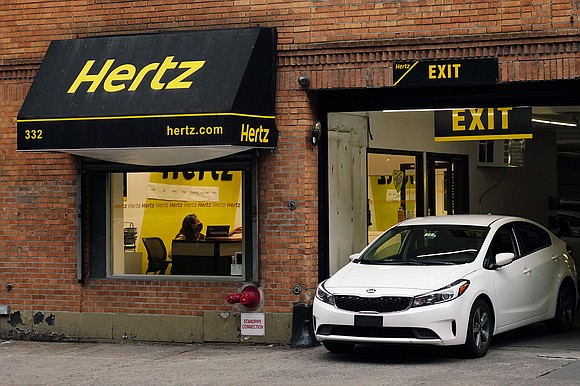 Two investment firms have agreed to pay a combined $4.2 billion to buy Hertz and take it out of bankruptcy by the early to mid-summer, another sign of growing hopes of a recovery in travel. Credit: Cindy Ord/Getty Images

(CNN) -- Two investment firms have agreed to pay a combined $4.2 billion to buy Hertz and take it out of bankruptcy by the early to mid-summer, another sign of growing hopes of a recovery in travel.

Hertz, which operates numerous other brands including Dollar and Thrifty, was among the flood of high-profile bankruptcies early in the pandemic era when it filed for bankruptcy in May.

The deal announced Tuesday would have the two buyers, Knighthead Capital Management and Certares Opportunities, buy at least a majority and as much of as 100% of the company. The plan would need the approval of the bankruptcy court.

The near-total halt of air travel in the spring proved a body blow for Hertz, which had already been losing money even before the pandemic hit. About two-thirds of car rental revenue comes from its airport locations. And with fewer people driving and having accidents during the pandemic, there was also less need for car rentals for people having their cars repaired, another major source of the rental business.

But as with many of the companies that were forced into bankruptcy during 2020, Hertz had been struggling with losses and other competitive issues long before the pandemic.

"We've been making excellent progress ... repositioning our business as we prepare for increased travel demand as the pandemic subsides," said Hertz CEO Paul Stone. "The support of the [proposed buyers] demonstrates their confidence in Hertz's growth potential; moreover, they bring valuable experience in the travel and leisure industry."

The company that will emerge from bankruptcy will be much smaller. Hertz cut about 12,000 US employees and another 2,000 international employees last year, closed locations and sold off nearly 200,000 vehicles, while putting the brakes on the purchases of new vehicles.

But it won't necessarily be out of the woods with its emergence from bankruptcy.

No one is sure when air travel will start to get back to normal. And business travel, a major driver of car rentals, is expected to stay depressed from pre-pandemic levels for several years.

"I think it's an open question of whether the recovery happens by the summer or fall or winter, but I think almost certainly we'll be well into the recovery in 2022," said Scott Kirby, the CEO of United Airlines, speaking at the CERAWeek by IHS Markit investor conference on Monday. "I think business travel takes a little while to recover, but there's going to be significant leisure demand."

There is also growing competition from ride hailing services such as Uber and Lyft. Although health concerns have hurt those businesses even more than the rental car business, the return of post-pandemic travel patterns will bring renewed competition. And businesses have also learned to do more with video conferencing during the pandemic, cutting down on the need for as much travel.

While Hertz has used the bankruptcy process to become financially healthier, history is full of companies that emerge from bankruptcy and end up being forced to file a second time. And very often the second bankruptcy filing is what often ends up spelling the demise of the company, particularly in the retail sector. That is what happened with RadioShack, Payless Shoes, American Apparel and Gymboree.