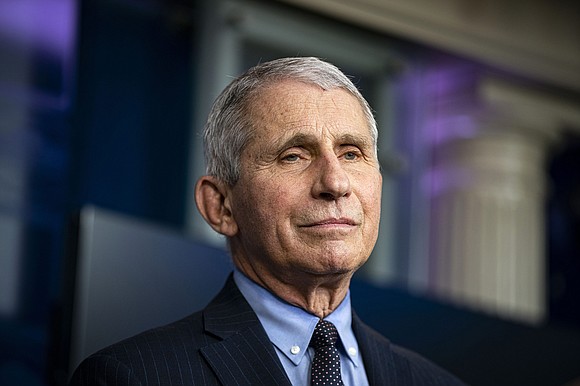 While tens of thousands of Americans are infected with the coronavirus each day and more research suggests variants threaten another surge, some state leaders are loosening Covid-19 restrictions against the recommendations of health experts. Credit: Al Drago/Bloomberg/Getty Images

(CNN) -- While tens of thousands of Americans are infected with the coronavirus each day and more research suggests variants threaten another surge, some state leaders are loosening Covid-19 restrictions against the recommendations of health experts.

The decision to roll back measures is "inexplicable," said Dr. Anthony Fauci, the director of the National Institute of Allergy and Infectious Diseases.

"I understand the need to want to get back to normality, but you're only going to set yourself back if you just completely push aside the public health guidelines -- particularly when we're dealing with anywhere from 55 (thousand) to 70,000 infections per day in the United States," Fauci told CNN's Erin Burnett.

The governors of Texas and Mississippi said Tuesday they were lifting mask mandates and allowing businesses to operate at full capacity immediately or within days, announcements that came as health experts warn that the spread of more-transmissible variants risks sending infection rates soaring once again.

Of particular concern to health experts is the B.1.1.7 variant which was first identified in the UK and has now been found in 44 US states, as well as Puerto Rico and Washington, DC.

A person with that variant can infect 43% to 90% more people than the older versions of the virus, according to evidence published Wednesday by researchers the Centre for Mathematical Modelling of Infectious Diseases at the London School of Hygiene and Tropical Medicine.

In a statement, the Infectious Diseases Society of America said the US must continue to use masks, social distancing, hand washing and avoid large gatherings.

"We can't forget the lessons this pandemic has taught us or its terrible toll, and we must not relinquish the ground we've gained," said Dr. Barbara Alexander, the president of ISDA.

Even in states where leaders are no longer requiring those measures, US Disease Control and Prevention director Dr. Rochelle Walensky said individuals can decide to "do the right thing" about distancing and wearing masks.

At least 16 states are now without statewide mask mandates.

With less than 7% of residents in his state fully vaccinated, Texas Gov. Greg Abbott issued an executive order Tuesday lifting a statewide mask mandate and allowing businesses to operate at 100% capacity, effective March 10.

"It is clear from the recoveries, the vaccinations, the reduced hospitalizations and the safe practices that Texans are using, that state mandates are no longer needed. We must now do more to restore livelihoods and normalcy for Texans," Abbott representative Renae Eze told CNN.

The governor said county leaders may opt to use mitigation strategies if regional Covid-19 hospitalizations rise above 15% of bed capacity for seven days straight. But they cannot impose jail time for people who don't follow Covid-19 orders, nor can residents be penalized for not wearing masks, he said.

In Houston, the chief of staff of the United Memorial Medical Center said he told his staff to prepare for surges in patients because of the changes.

"If we open the state on the 10th, I'm telling you, before the end of March, we're going to have problems," Dr. Joseph Varon told CNN's "New Day" on Wednesday.

"Our hospitalizations and case numbers have plummeted, and the vaccine is being rapidly distributed. It is time," Reeves wrote about his decision on Twitter.

"I really do think that we, as a state, are getting too lax, too quickly. I pray that I'm wrong," said Shanne Pegues told CNN affiliate WLOX.

Mayors of some cities, including Jackson and Greenville, said they will keep enforcing citywide mask mandates.

And in Louisiana, the majority of businesses -- including restaurants and salons -- will be allowed to operate at 75% capacity starting Wednesday, while religious services will no longer have capacity limits, the governor said.

A third vaccine entered the US market this week after the US Food and Drug Administration gave emergency use authorization to Johnson & Johnson's one-dose product. Before this week, the only Covid-19 vaccines authorized in the US -- from Pfizer/BioNTech and Moderna -- were two-dose vaccines.

Health experts are excited about the new option, which they say is easily distributed due to its single-dose model and ability to be stored at normal refrigeration temperatures.

But some with the option to receive it have expressed hesitancy.

Because the public has heard that the shot is only 72% protective in the US, and the Pfizer and Moderna Covid-19 vaccines are about 95% protective, some will think this is a "second class" vaccine, experts have said. Experts say those numbers are highly misleading -- and are urging people to take whatever shot is first available to them.

"My big concern here is that the Johnson & Johnson is being labeled as the inferior vaccine," said Dr. Leana Wen, a CNN medical analyst and former Baltimore public health commissioner, "when that's not a fair assessment to make."

With limitations on distribution and the race to vaccinate Americans before another surge, some people may get to choose their vaccine, while others may not, officials have said.

That is the right choice for the current emergency, a team of bioethicists wrote in a commentary in the New England Journal of Medicine.

"In most aspects of US health care, patient preferences are paramount, and currently Americans remain free to decline vaccination against SARS-CoV-2. But among the willing, a policy limiting choice among vaccines will bring efficiencies to the fair distribution of a critically scarce resource," they concluded.

High school students likely to be vaccinated in the fall

J&J has set its sights on exceeding its target of 100 million doses by the end of June, CEO Alex Gorsky said.

And experts have estimated that vaccines will be available to all US adults by May, but the question of when children can be vaccinated isn't clear.

"Right now, we project that the clinical trials will give us information that by the time we get to the fall, high school students will be able to be vaccinated," Fauci said Wednesday. "I'm not sure if it's going to be by the first day of school, but sometime in the fall."

Their younger siblings will have to hold out a little bit longer, he explained, during a livestreamed town hall event with members of the United Food and Commercial Workers International Union.

"The way the program is now scheduled, children who are elementary school, 6 to 12, that group of individuals ... those individuals will not be able to be vaccinated until their trials are finished, which will likely be at the earliest, the end of this year," Fauci said. "More likely the first quarter of 2022."