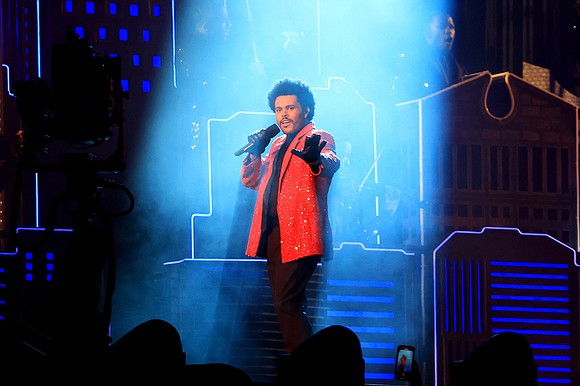 Singer The Weeknd, performs here for Super Bowl February 07, in Florida is the latest chart-topping Black performer to be snubbed by the Grammys. Credit: Mike Ehrmann/Getty Images

(CNN) -- "Blinding Lights" singer The Weeknd may be the latest chart-topping Black performer to be snubbed by the Grammys, but he's far from alone.

A new study unveiled Tuesday underscores just how rare it has been for the music industry's most prestigious awards ceremony to bestow its highest honors to Black recording artists, a growing trend in recent years, despite many receiving critical acclaim and dominating the Billboard music charts.

The USC Annenberg Inclusion initiative released the findings from its "Black Artists on the Charts & Nominees at the Grammys" report exclusively to CNN Business ahead of the 63rd annual Grammy Awards on Sunday.

The diversity think tank's researchers cross-referenced the number of Black artists who made the Billboard Hot 100 over the last nine years with the number of Grammy nominations they received in the award show's most coveted "Big Four" categories: Album of the Year, Record of the Year, Song of the Year and Best New Artist.

They discovered Black performers represented about 38% of all artists on Billboard's signature chart from 2012 to 2020, yet they received only 26.4% of top Grammy nominations during the same period. Only 23% of this year's top Grammy nominees were Black, according to the study.

It only takes one hand to count the number of Black artists who have actually won a Grammy in the Big Four categories over the last nine years. (There have been only four.) And even that number is misleading, because it includes Black artists featured on White performers' songs.

The study's lead author Dr. Stacy L. Smith says the popularity of artists like Drake, Rihanna and Jay Z has not translated into recognition in major Grammy categories.

Smith acknowledged the popularity of a song doesn't always equate with its artistic merit, but she blames the lack of diversity among Grammy voters and the music industry's executive ranks for the lack of Black major Grammy winners.

"Don't just tell me the percentage of underrepresented folks across an entire organization, tell me the level," Smith told CNN Business during a Monday Zoom interview. "Usually as the power goes up, the representation goes way down."

"This is America" rapper Childish Gambino, aka Donald Glover, is the only Black solo artist to win a Grammy for Song of the Year since 2009. Glover's hit earned him an additional golden sonogram trophy for Record of the Year at the 2019 Grammys ceremony.

In 2013, singer Janelle Monáe shared a Song of the Year award with the band Fun after a feature on the group's summer anthem "We Are Young".

Chance the Rapper is the only Black performer to win a Best New Artist award since 2012. In 2014, Pharrell Williams won Record of the Year for "Get Lucky" and shared an award for Album of the Year with Daft Punk for "Random Access Memories" the same year. And pianist Herbie Hancock was the last solo Black artist to win Album of the Year, back in 2008.

During her acceptance speech for Album of the Year for the acclaimed "25" in 2017, a weeping Adele famously told the Grammys audience that she couldn't accept the accolade in good faith, because she believed it should have gone to Beyoncé for the latter singer's widely praised album "Lemonade."

"There is a significant disconnect between the popularity of music and whether that music receives the awards and accolades it deserves," Reign told CNN Business. "It truly comes down to the membership of the voting body."

The Recording Academy — the Santa Monica, California-based non-profit that runs the Grammys — did not respond to requests for comment.