Jehovah’s Witnesses Invite the Public to a Special Talk 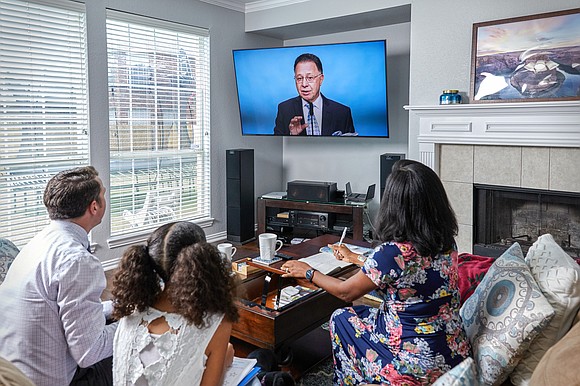 Growing up in a musical family, Raymond Maynard, of Bryan, was determined to seek stardom, but the time spent in that quest would not compare to the “priceless pearl” he would later find.

After years of a successful musical career, Maynard left behind his profession and discovered the peace of mind that comes from serving God and others. “

Maynard is not alone. In this time of pandemic, when many have lost the things they thought were of the highest value, some have made their spirituality a priority. They feel like the merchant in an ancient parable who found a pearl of such great worth that he sold everything he had to obtain it.

“Have You Found a ‘Pearl of High Value’?” is the theme of a global virtual event to which Jehovah’s Witnesses are inviting the community in March. In the Gospel account, Jesus Christ used the parable of the pearl to illustrate the motivating value for the truth about God’s Kingdom, the solution to mankind’s problems.

This free 30-minute program unlocks the meaning of that parable, explaining what the Kingdom of the heavens is and how that valuable knowledge can help us attain peace and a sense of security even now.

“The pandemic changed our lives within weeks, bringing the economic, educational, and social systems to their knees,” said Robert Hendriks, U.S. spokesman for Jehovah’s Witnesses. “What has not changed is spirituality and its powerful effect on people’s lives.”

That proved true for Kaya Madison, who was raised Catholic but became agnostic when she couldn’t find answers to the myriad of questions she had about God. “I was really searching,” she said.

Early in the pandemic, a coworker prompted the 23-year-old college student from San Diego to read an article about the four horsemen of the Apocalypse on jw.org, the official website of Jehovah’s Witnesses. As an aspiring writer who loved to pen the mythological and magical, Madison found the horsemen intriguing — from the charging white horse with its royal rider to the pale sickly horse saddled by a skeleton.

I was blinded by the prestige and the wanting to become a star. But my blessings now are endless. My life couldn’t be better,” he said.

“I wanted my questions answered,” said Madison, who soon started studying the Bible with Witnesses every morning at 8 a.m. via video conference. Bible prophecy came to life for her, revealing a brighter future. “I’m just happier than I’ve ever been in my life,” she said.

She was baptized as one of Jehovah’s Witnesses in August 2020. Now instead of writing about myths and magic, she plans to write about something spiritual — the Biblical hope of a global paradise.

Like Kaya, Jermane Mayberry recalls his decision to invest in the “priceless pearl” years ago.

At the height of a professional football career, Mayberry, from Houston, discovered truths about God that moved him to share what he learned with others and give up his profession. Mayberry said, “With football, you have to give it your all, and your schedule revolves around your job. But I loved the ministry and I wanted to preach.”

Amid the COVID-19 pandemic, Mayberry and his family continue serving God together and he joyfully recounts his blessings. “We have meaningful work, peace of mind, real security for the future — everything that we need to be happy and to thrive,” he shared.

Evaluating his life now against his previous career, he adds, “Learning about the Kingdom, it doesn’t even begin to compare. It’s so much more valuable than anything that I would have gained by pursuing those interests in sports.”

The presentation about the valuable pearl will be held on select dates during the first three weeks of March through local congregations of Jehovah’s Witnesses. It preludes another event that the Witnesses are also inviting people to attend: the annual observance of the Memorial of Jesus Christ’s death on March 27.

“We invite anyone searching for peace, security, comfort and hope to attend,” Hendriks said. “The special talk and the Memorial of Jesus Christ’s death will show people how they can obtain something priceless that will make their lives better, not only now, but also in the future, even forever.”

Due to the pandemic, congregations around the world will host both events virtually. There are no fees to attend, and no registration is required.

To learn more about how to attend locally, ask one Jehovah’s Witnesses or visit www.jw.org