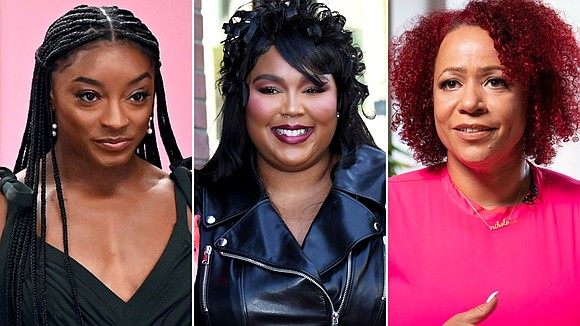 The November/December Essence magazine features Simone Biles, Lizzo and Nikole Hannah-Jones on three different cover editions, and each woman discussed in the issue how they prioritize their mental health. Mandatory Credit: Getty Images/AP

(CNN) -- Essence magazine has dubbed this the "year of radical self-care," and to celebrate, it's featuring three heroes in the world of wellness.

The November/December issue of the magazine features Simone Biles, Lizzo and Nikole Hannah-Jones on three different cover editions, and each woman discussed in the issue how they prioritize their mental health.

"Now more than ever before, Black women are not only putting their mental health first, but recognizing the life-changing, soul-moving power of saying 'no,'" the magazine said. "In our final issue of 2021, we're reflecting on this Year of Radical Self-Care by celebrating the women who publicly said no to societal expectations and yes to themselves."

Seven-time Olympic gold medal gymnast Simone Biles shocked fans this summer when she withdrew from competitions in the Tokyo Olympic games to focus on her mental health.

Nikole Hannah-Jones also took a courageous risk for her own worth this summer when she chose to decline a tenure offer from the University of North Carolina at Chapel Hill -- after the University's debate over whether she should get it -- to join the faculty of Howard University.

"I have been very, very thoughtful about my decision to go to an historically Black college, and what I decided is since the second grade, when I started being bussed into White schools, I've spent my entire life proving that I belong in White spaces that were not built for Black people," Hannah-Jones said, in an appearance on "CBS This Morning" with Gayle King at the time.

Musical artist Lizzo has been hailed as a champion for self-acceptance and body positivity, celebrating her individuality even as some criticized her for it.

"It's exhausting," she told the magazine. "And that's the point. I don't want to talk about this anymore. We should be neutral about bodies."

For Hannah-Jones, the cover was the culmination of a long history of broadening perspectives.

"This was a dream I didn't even have the audacity to dream. No magazine has meant more to me than @essence. As a Black girl from a working-class family in a working-class town, Essence exposed me to the beautiful spectrum and possibilities of Black womanhood. I am pinching myself," she tweeted.

People on social media raved about the beauty and importance of the covers.

"One of the great things about this is that little girls AND boys of ALL races are watching. they may not be subscribers, but they'll still be able to see the beauty and accomplishment this represents. keep pushing through," Twitter user J. McCavendish said.