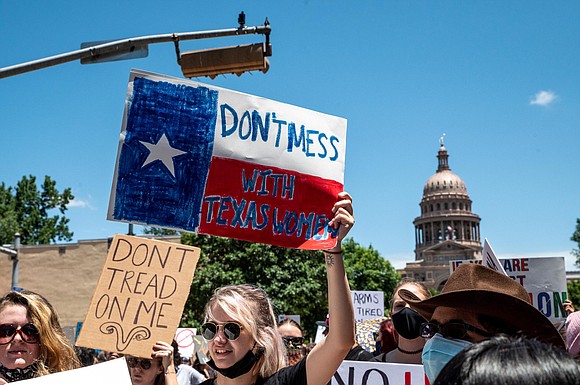 A San Antonio doctor who wrote a Washington Post op-ed claiming that he had violated Texas' six-week abortion ban now faces at least two lawsuits brought against him under the ban, and pictured, protesters on May 29, in Austin, Texas. Mandatory Credit: Sergio Flores/Getty Images

(CNN) -- A San Antonio doctor who wrote a Washington Post op-ed claiming that he had violated Texas' six-week abortion ban now faces at least two lawsuits brought against him under the ban, both brought by plaintiffs who say they oppose the new law.

One lawsuit was filed Monday by Oscar Stilley, a former tax attorney in Arkansas who is serving a home confinement sentence for a federal conviction on tax crimes.

He filed the lawsuit against the physician, Dr. Alan Braid, in Bexar County.

In a phone interview with CNN, Stilley said he is an opponent of the law that bars most abortions in the state, but wants to clear the way for a judge to rule on its constitutionality.

"I am a supporter of the Constitution, and I am opposed to the law," Stilley said.

A second lawsuit has been filed against Braid by Felipe N. Gomez, an Illinois resident who describes himself as a "Pro Choice Plaintiff" in the suit.

The lawsuits open up a new front in the legal war around the six-week abortion ban, which went into effect on September 1.

Nancy Northup, president of the Center for Reproductive Rights, the organization legally representing Braid, said her client had been called to challenge the legality of the law because the alternatives for his patients are "untenable" and that the law is "creating havoc on reproductive health care in Texas."

Northup said in an interview with CNN's Anderson Cooper that Braid had felt compelled to violate the law in order to offer the best health care for his patients.

"Dr. Braid has been providing health care, reproductive health care, to women for almost five decades, and he's used to being able to give his patients options, and with the Texas law in place, he is having to turn most of his patients away. The options that he has for them are untenable," Northup said.

Abortion rights advocates have so far failed to get a federal court to block the law, as the ban's supporters designed it with the goal of evading judicial review. Rather than task government officials with enforcing the ban, via criminal or regulatory punishments, the Texas state legislature essentially deputized private citizens with the ability to bring private civil litigation in state courts against abortion providers or anyone else who facilitates an abortion that violates the law.

"S.B. 8 says that 'any person' can sue over a violation, and we are starting to see that happen, including by out-of-state claimants," Marc Hearron, senior counsel for the Center for Reproductive Rights, said Monday in a statement.

Braid did not immediately respond to CNN's inquiries.

The anti-abortion activists who championed the new ban have touted the chilling effect it immediately had, as many abortion providers in the state have publicly said that they were complying with the law for now. Under the Texas law, clinics that are found, in private state court enforcement actions, to be in violation of the ban are on the hook for at least $10,000 in damages.

But John Seago, who heads Texas Right to Life, emphasized that neither case was filed "from the Pro-Life movement."

"Both cases are self-serving legal stunts, abusing the cause of action created in the Texas Heartbeat Act for their own purposes," Seago said in a statement.

"The question isn't whether Dr. Braid is going to win this lawsuit; he almost certainly will," noted Steve Vladeck, CNN legal analyst and professor at the University of Texas School of Law.

"It's how future SB8 lawsuits can be blocked," Vladeck said. "And nothing that happens in this case can prevent future lawsuits from being brought -- that's the whole point of transferring enforcement authority from a single state to a limitless class of potential private plaintiffs."

These two lawsuits may face procedural hurdles because they have been filed by individuals who do not support the law. "The judge will have to sort that out," Vladeck said.

Stilley's lawsuit was first reported by The Washington Post.

Stilley told CNN he was suing Braid because wanted a "judge to make a ruling on" the law.

"I think the doctor has guts and he has principle and I decided that I would be the one to get some clarity on this law," Stilley said.

Stilley, who was charged with several federal tax crimes in 2009 and was later convicted, said he was serving as his own lawyer in the case.

This story has been updated with additional details and further developments.