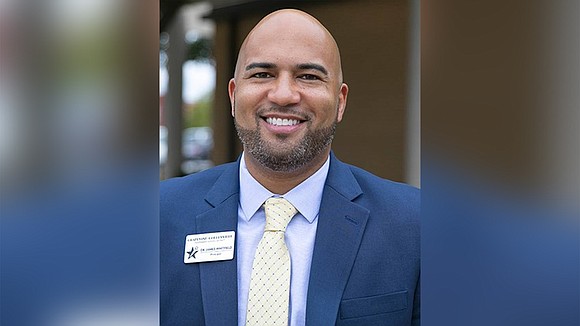 James Whitfield, a high school principal in Texas, found himself in the middle of a controversy over critical race theory. Mandatory Credit: From Colleyville Heritage High School

(CNN) -- A Texas school district board voted unanimously to give notice of a proposed non-renewal of the contract of a principal at the center of controversy over critical race theory.

James Whitfield, principal of Colleyville Heritage High School in the Dallas-Fort Worth area, was placed on paid administrative leave in late August, a month after a former school board candidate publicly accused him of having "extreme views on race" and called for him to be fired.

The vote Monday night is a procedural step and does not terminate Whitfield's contract for the 2022-23 school year, Grapevine Colleyville Independent School District Executive Director of Human Resources Gema Padgett said. Next, Whitfield will receive a letter with details of the grounds and he will have an opportunity to present evidence and testimony, she said.

The controversy at the high school and around Whitfield comes as a number of parents and community members across the state have urged that critical race theory not be taught in schools.

Over the past year, critical race theory has sparked heated discussions and protests at school board meetings as well as among lawmakers who say it should be banned from being taught in classrooms.

Educators however have said the theory, which examines the ways in which a history of inequality and racism has continued to impact American society today, is not included in the K-12 curriculum.

At a July 26 school board meeting, Stetson Clark, a former school board candidate, said he was concerned about the "implementation of critical race theory in our district" and named Whitfield as someone with "extreme views on race."

"Because of his extreme views, I ask that a full review of Mr. Whitfield's tenure in our district be examined and that his contract be terminated effective immediately," Clark said in the meeting, citing a letter he said a friend shared that Whitfield sent to parents and students last year -- which Clark claims showed the principal "promotes a conspiracy theory of systemic racism."

At Monday's meeting, at which several parents spoke out in favor of Whitfield, the board presented reasons for the proposed non-renewal.

Some of the reasons that were cited by the board included deficiencies pointed out in observation reports, appraisals or evaluations, and failing to comply with board or administrative regulations.

Whitfield's attorney David Henderson told CNN that the board was holding back on sharing information; "So everything they've given us so far is incomplete, including the information that they gave us last night," he said.

"My primary response to what they said today is the realization that we are going to have to get into a formal process where we get to ask for more information that is supporting their decisions before we know fully how we need to respond," Henderson said.

Before the vote, Whitfield offered another explanation to what brought on the vote: his unapologetic stance on equality.

"I stand before you today no different than I was when I came in 18-19. I am an advocate for all kids. I believe every student, regardless of race, religion, sexual orientation, whatever bucket you want to put them in, I believe they all should have access to excellent, equitable education. Yes, I said those words," he said.

"The attack from people outside is one thing, but the outright silence and direct actions taken towards me by GCISD leadership team...was absolutely heartbreaking."