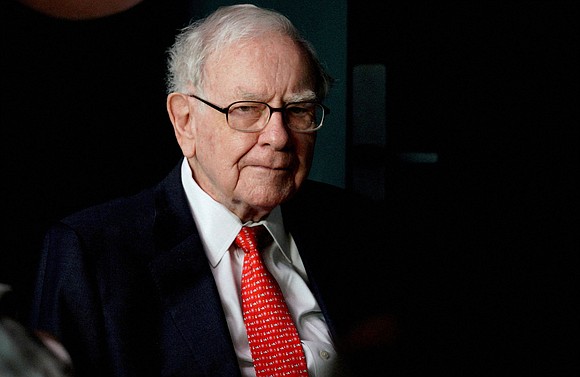 On August 6, Berkshire Hathaway reported that the massive conglomerate posted a net loss of nearly $44 billion in the second quarter, red ink that was due mostly to a big drop in the value of Berkshire's significant stock portfolio. CEO Warren Buffett is pictured here in Nebraska in 2018. Mandatory Credit: Rick Wilking/Reuters

(CNN) -- Warren Buffett is just like the rest of us. He got crushed by the plunge in the stock market during the first half of the year. But the Oracle of Omaha is undeterred by the wildness on Wall Street. Berkshire Hathaway is still buying and many of the the company's diverse business lines are still thriving, even in these uncertain economic times.

Berkshire Hathaway reported Saturday that the massive conglomerate posted a net loss of nearly $44 billion in the second quarter, red ink that was due mostly to a big drop in the value of Berkshire's significant stock portfolio.

Berkshire owns large stakes in Apple, Bank of America, Coca-Cola, Chevron and American Express. Those five stocks make up nearly 70% of the portfolio. Chevron and Coke have both rallied this year but tech stocks and financials have been significant market losers.

But the steep loss in the value of Berkshire's portfolio is not the whole story. The firm actually reported an operating profit of $9.3 billion in the quarter, up nearly 40% from a year ago.

That gain was due in part to higher interest rates boosting portions of its colossal insurance unit. There were also jumps in earnings from Berkshire's railroad, utility and energy businesses.

Big rebound for Berkshire in the past two years

Berkshire's many businesses have bounced back sharply from the depths of the Covid-induced slowdown in the economy in 2020.

"Because the Covid-19 pandemic negatively impacted most businesses, including Berkshire, in early 2020, comparing current results to pre-pandemic 2019 results is helpful" Bill Stone, chief investment officer of the Glenview Trust Company and a Berkshire shareholder, said in a report. "Operating earnings for the second quarter of 2022 are 51% above 2019."

Berkshire reported about $3.8 billion in net stock purchases during the second quarter. That's on top of the more than $40 billion in stocks Berkshire bought during the first quarter.

Buffett's firm also bought back $1 billion of its own shares during the quarter, a move that helps boost earnings per share.

Berkshire has been aggressive throughout the market downturn, scooping up a sizable stake in oil giant Occidental Petroleum and announcing an $11.6 billion deal for insurer Alleghany earlier this year.

The company's stock has held up better than the rest of the market in 2022. The super pricy class A shares, which trade for around $445,000 apiece because they don't split, are down about 2%. So are the shares of the class B stock, which cost a little less than $300 each and are in the S&P 500.

CFRA Research analyst Cathy Seifert said in a report after the earnings release that she sees "stable results in most segments" for Berkshire.

Shares of both classes of Berkshire Hathaway were up slightly in early morning trading Monday.

Buffett, who will turn 92 on August 30, has given no indication that he plans to step back from his roles as Berkshire CEO and top portfolio manager just yet.

But the company has already announced that Greg Abel, the 60-year old vice chairman of all of Berkshire's energy and other non-insurance units, will eventually take over for Buffett.