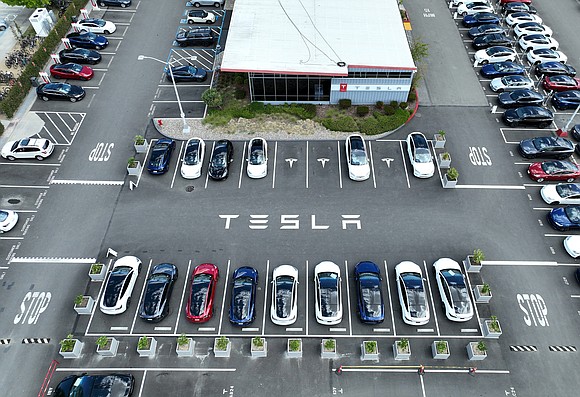 (CNN) -- The newly signed Inflation Reduction Act will have big implications for electric vehicle buyers. Some popular electric vehicles may become eligible for a tax credit once again, while other cars that were eligible this month will not be for the foreseeable future. Here's what you need to know as a consumer.

The Inflation Reduction Act's new credit immediately replaces the prior system and removes the 200,000 limit, but it creates new restrictions that are being phased in related to assembly, batteries, and supply chains. Plug-in hybrids will continue to be eligible for a partial credit.

The new law also imposes new restrictions on the price of vehicles, as well as limits on the income of the buyer.

How can I qualify for the tax credit?

There are plenty of stringent requirements for electric vehicles to receive the tax credit under the new law, which fully takes effect on January 1, 2023. Vehicles must be assembled in North America. Much of their battery components and battery minerals production must be in North America. Beginning in 2023, 40% of the critical minerals used to create a vehicle's battery must be extracted or processed in the United States, or a country that has a free trade deal with the US, for the vehicle to qualify. By 2027, that number will rise to 80% of the battery minerals. The battery component requirement calls for 50% to be manufactured or assembled in North America starting in 2023 and 60% in 2024 and 2025. That number will gradually grow to 100% in 2029.

Buyers purchasing a used electric vehicle or plug-in hybrid can for the first time receive as much as $4,000.

You also must purchase a vehicle before December 31, 2032.

How large is the tax credit?

New vehicles are eligible for as much as $7,500, provided their final assembly happens in North America. Half of the credit — $3,750 — depends on meeting the battery minerals requirement, and the other half depends on the battery component requirement.

There is a new credit for some buyers who purchase a used electric vehicle of up to $4,000. The credit may not exceed 30% of the vehicle's sale price.

What vehicles are eligible to receive the $7,500 tax credit?

No electric vehicles currently available for purchase will qualify for the full tax credit when sourcing requirements go into effect in 2023, according to the Alliance for Automotive Innovation, which represents automakers like Ford, GM, Hyundai, Toyota and Volkswagen. The new tax credit significantly reduces how many vehicles are eligible. Seventy percent of electric, hybrid and fuel cell vehicles eligible for purchase in the US are now ineligible for any credit, including partial, according to the trade group.

Popular electric models like the Hyundai Ioniq 5 and Kia EV6 will lose their eligibility under the new rules unless manufacturers make changes like where the vehicles are assembled.

Teslas, including the popular Model 3 and Y, was ineligible for a credit under the past structure since Jan. 2020, when the company reached the previous 200,000-vehicle limit per automaker. However, that limit will lift on Jan. 1, 2023, and Teslas will once again qualify for a tax credit, provided the company meets all other new requirements.

Consumers can enter a vehicle's vehicle identification number into a US Department of Transportation website to see where its final assembly occurs to determine if the vehicle is eligible for tax credit under the new law.

Are there any exceptions?

Some electric vehicles and plug-in hybrids remain eligible until year's end due to a quirk in the bill. The North American assembly provision took effect when Biden signed the bill, but nothing else. Consumers interested in electric vehicles manufactured in North America may want to consider a purchase before January 1, when the more demanding requirements begin.

Nissan confirmed to CNN Business that the Leaf will remain eligible for the full credit through the end of 2022. Volvo expects the S60 Recharge to continue to qualify to year's end given guidance from the Department of Energy.

The Mercedes-Benz EQS SUV is expected by the automaker to be eligible until year's end, but not the EQS sedan because, unlike the SUV, it is not assembled in the United States. BMW says the X5 plug-in hybrid and 3-series plug-in hybrid will both be eligible for the rest of 2022.

Ford says its electric and plug-in vehicles, including the Mustang Mach-E, F-150 Lightning and Escape plug-in hybrid will be eligible for the rest of the year.

These vehicles would need to be delivered by year's end.

Rivian vehicles are made in North America, but any new orders placed in the final months of the year are unlikely to get the credit as the automaker has an order backlog that exceeds its production goal for the year, so customers wouldn't take delivery before 2023.

Automakers and consumers are in a state of limbo for 2023 as the government finalizes the tax credit. It's unclear, for example, how the government will determine if a vehicle meets the battery minerals and battery component thresholds. Ultimately, the IRS will provide a list of vehicles to consumers that shows how much money they're eligible to receive.

Why are there so many more restrictions?

Sen. Joe Manchin, a critical vote, had concerns about US reliance on foreign countries for electric vehicle components. Manchin noted that the US built its own gas-powered vehicles and engines, suggesting the country should be able to do the same with electric vehicles and batteries. The tax credits may incentive automakers to shift battery metals extraction and processing, as well as vehicle assembly, to North America. Some experts have cautioned about national security risks associated with the reliance on foreign countries for electric vehicles.

If I find an eligible vehicle, how soon can I get the tax credit money?

Initially, buyers will need to wait to receive the tax credit when they file their taxes. But starting in January 1, 2024, electric vehicle buyers will be able to receive the money immediately, at the point of sale, if they agree to transfer the credit to their dealership.