What the Fed rate hike means for you 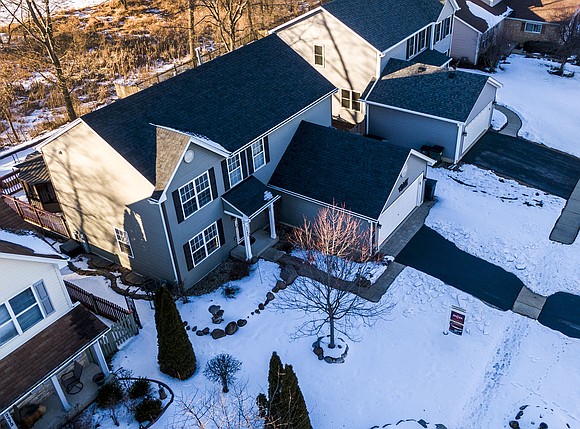 An aerial photo made with a drone shows a house for sale in Round Lake Heights, Illinois, USA, 21 January 2021. Mandatory Credit: Tannen Maury/EPA-EFE/Shutterstock

(CNN) -- The Federal Reserve is stepping up its war on inflation. That means borrowing costs are going sharply higher for families and businesses.

The US central bank last increased its benchmark interest rate by three-quarters of a percentage point, which is the biggest single hike since 1994.

This follows the Fed's decision to raise its rate by half a percentage point in May, the biggest increase in 22 years.

The Fed is expected to announce another three-quarters of a point rate hike on Wednesday at 2 p.m.

The fact that the Fed is moving decisively shows confidence in the health of the job market. But the speed with which interest rates are expected to go up underscores its growing concern about the soaring cost of living.

High inflation will likely force the Fed to raise interest rates several more times in the coming months. Fed officials may even resort to additional large rate increases in a bid to cool off inflation.

Americans will initially experience this policy shift through higher borrowing costs: It is no longer insanely cheap to take out mortgages or car loans. And cash sitting in bank accounts will finally earn something, albeit not much.

The Fed speeds up or slows down the economy by moving interest rates higher or lower. When the pandemic erupted, the Fed made it almost free to borrow in a bid to encourage spending by households and businesses. To further boost the Covid-ravaged economy, the US central bank also printed trillions of dollars through a program known as quantitative easing. And when credit markets froze in March 2020, the Fed rolled out emergency credit facilities to avoid a financial meltdown.

The Fed's rescue worked. There was no Covid financial crisis. Vaccines and massive spending from Congress paved the way for a rapid recovery. However, its emergency actions -- and their delayed removal -- also contributed to today's overheated economy.

Unemployment is currently close to a 50-year low, but inflation is very high. The US economy no longer needs all that help from the Fed. And now the Fed is slowing the economy down by aggressively hiking interest rates.

The risk is that the Fed overdoes it, slowing the economy so much that it accidentally sparks a recession that drives up unemployment.

Borrowing costs are going up

The most tangible way this is playing out is with mortgages, where rate hikes have already driven up rates and slowed down sales activity.

The rate for a 30-year fixed-rate mortgage averaged 5.54% in the week ending July 21. That's up sharply from under 3% this time last year.

Higher mortgage rates make it harder to afford home prices that have skyrocketed during the pandemic. That weaker demand could cool off prices.

The median price for an existing home sold in June soared by 13.4% year-over-year to $416,000, according to the National Association of Realtors.

How high will rates go?

Investors are expecting the Fed will raise the high end of its target range to at least 3.75% by the end of the year, up from 1.75% today.

And in the 1980s, the Paul Volcker-led Fed jacked up interest rates to unprecedented levels to fight runaway inflation. By the peak in July 1981, the effective Fed funds rate topped 22%. (Borrowing costs now won't be anywhere near those levels and there is little expectation that they will go up that sharply.)

Still, the impact to borrowing costs in coming months will depend chiefly on the -- as yet undetermined -- pace of the Fed's rate hikes.

Rock-bottom rates have penalized savers. Money stashed in savings, certificates of deposit (CD) and money market accounts earned almost nothing during Covid (and for much of the past 14 years, for that matter). Measured against inflation, savers have lost money.

The good news, however, is that these savings rates will rise as the Fed moves interest rates higher. Savers will start to earn interest again.

But this takes time to play out. In many cases, especially with traditional accounts at big banks, the impact won't be felt overnight.

And even after several rate hikes, savings rates will still be very low -- below inflation and the expected returns in the stock market.

Markets will have to adjust

Free money from the Fed was amazing for the stock market.

Zero percent interest rates depress government bond rates, essentially forcing investors to bet on riskier assets like stocks. (Wall Street even has an expression for this: TINA, which stands for "there is no alternative.")

Higher rates have been a major challenge for the stock market, which had become accustomed to -- if not addicted to -- easy money.

The ultimate impact to the stock market will depend on how fast the Fed raises interest rates -- and how the underlying economy and corporate profits perform going forward.

The goal of the Fed's interest rate hikes is to get inflation under control while keeping the job market recovery intact.

Consumer prices spiked by 9.1% in June from the year before, the fastest pace since December 1981, according to the latest data from the Labor Department. Inflation is nowhere near the Fed's goal of 2% and has gotten worse in recent months.

Economists warn inflation could get even worse because gas prices have continued to hit record highs in recent days, exacerbating a spike that began after Russia invaded Ukraine.

Everything from food and energy to metals have become more expensive.

The high cost of living is causing financial headaches for millions of Americans and contributing significantly to record-low consumer sentiment, not to mention President Joe Biden's low approval ratings.

Yet it will take time for the Fed's interest rate hikes to start chipping away at inflation. And even then, inflation will still be subject to developments in the war in Ukraine, the supply chain mess and, of course, Covid.